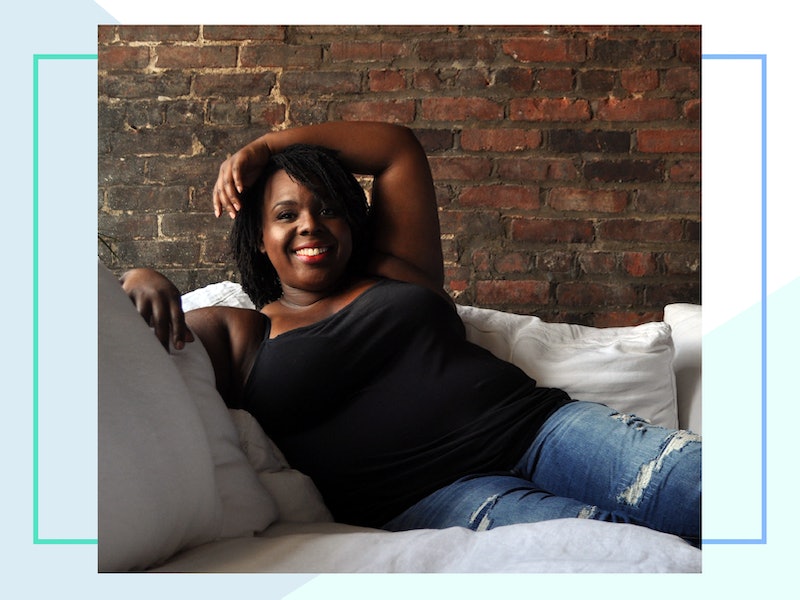 When CeCe Olisa arrives at a studio space in downtown New York City, she's not quite sure whether she wants to take her clothes off. The writer, founder of body positive fashion and lifestyle blog Plus Size Princess, and Curvy Con co-host has shot in lingerie, swimwear, and belly-baring crop tops before. But today, she's going to be talking about her arms — and she doesn't think she has to be almost-naked in order to do so.

"Sometimes I feel like we choose nudity to convey body positivity more often than is necessary," Olisa later tells me. "I always want to make embracing my body accessible to anyone who is on the [self love] journey." Even if they're not quite there for their naked bod yet.

Although it's clear that the blogger understands why the reclamation of one's othered body and nudity often go hand in hand, she doesn't believe in devaluing baby steps. After all, there was a time when even wearing jeans and a spaghetti strap T-shirt made her feel vulnerable and exposed, and this progression is one she wanted to channel in her images.

Growing up, having large arms was something Olisa felt "super aware" of. The Nigerian California girl would would spend the hottest months of the year in sweaters and hoodies, but feeling like she was melting was preferable to having her "arms see the light of day."

Although finding the body positivity movement online and starting her own blog (a site jam-packed with dating, fitness, beauty, and fashion advice for humans of size) are what most helped her on her own journey to body confidence and autonomy, self love has been an ongoing process. In the earliest days, the thought of letting a stranger take boudoir-like photographs of her would have been more than a little bit scary.

Pushing through experiences despite fearing them has been crucial for Olisa, though. "Doing something terrifying like leaving my cardigan at home and wearing a tank top, and then seeing that nothing happened," was a tool she found especially useful in learning to embrace her figure. When the sweaters started staying home, she tells me, "My day was normal, [and] if anything I was more comfortable. All the hooplah was in my head."

Of course, our heads can be our worst enemies sometimes — and it's not difficult to see why. When you're living in a plus size body, you are constantly told that you need to be repaired. You are told that there's a "thin person within" hoping to be freed someday. In actuality, it's more often the person you already are who needs to be freed: Freed of social stigma that creates the negative self-talk in the first place.

Olisa's advice when it comes to starting to reclaim a particular part of the body you've struggled with is to "choose an activity that will only take an hour or two and use that to show the body part you've been hiding." If you're convinced your arms are a "problem area," for instance, she says you should consider "taking your dog for a walk in a tank top and no jacket. You can always come home and cover up, but in those two hours you'll probably feel liberated and want to do more."

Sometimes "doing more" can translate to speaking up. A recurring theme in the narratives of many self-identified fat people is the pressure to shrink and be silenced; to go with the flow, let people treat you like crap, and be as complacent and invisible as possible. Fat bodies make people uncomfortable, right? So we can try our hardest to make such people more comfortable by remaining quiet and striving to be small.

Olisa has felt particularly stigmatized for her bodies in two different contexts throughout her life. Despite being a feminine person, she believes people have long perceived her as a more masculine figure because of her larger, wider body. "I'd get playfully punched in the arm, or clapped on the back roughly, she tells me. "And I didn't like it." She's also found that, as a larger person, "People feel it's OK to invade my personal space." This can mean acquaintances sitting next to her at a party, resting their heads on her shoulders, and musing on how soft and comfortable she is, or strangers on the subway leaning onto her for support instead of on the handle bars.

Thanks to such occurrences, Olisa has had to find ways to establish that "my body isn't public space." This can mean saying "ouch" or asking, "Why are you hitting me?" when she feels that her femininity and her body are being mistreated. Or finding ways to vocalize the simple thought, "Yes, I'm a big girl, but that doesn't mean I'm a brick wall or teddy bear."

Much like stripping down to your undies isn't always easy when you've felt marginalized for your body, speaking up doesn't come naturally 100 percent of the time, either. You have to feel safe doing so. And this is where certain kinds of affirmations may come in.

When Olisa thinks about her arms these days, for example, she reminds herself of the power they contain. "This morning, I carried my bike up the stairs," she tells me. "Without my arms, I couldn't have done that, so I'd say [I'm] grateful."

If you allow yourself to think of a part of your body in such a way — being mindful of all the glorious things that it can do — you can hopefully apply the same mentality to the rest of your physique. Because when you realize that your body often has the potential to allow you to do and speak and experience many things, you also realize that it is worthy of respect. And then you can take that respect back. Sometimes you can even demand it back.

More like this
I Tried Kendall Jenner's No-Pants Look As A Plus-Size Woman
By Sarah Chiwaya
10 Shower Products That Have Gained Fame On TikTok
By Audrey Noble
The 9 Best Vagina Hygiene Products, According To ShowerTok
By Carolyn Steber
Selena Gomez Posted A No-Makeup Selfie & We Stan A Relatable Queen
By Olivia Rose Rushing
Get Even More From Bustle — Sign Up For The Newsletter
From hair trends to relationship advice, our daily newsletter has everything you need to sound like a person who’s on TikTok, even if you aren’t.