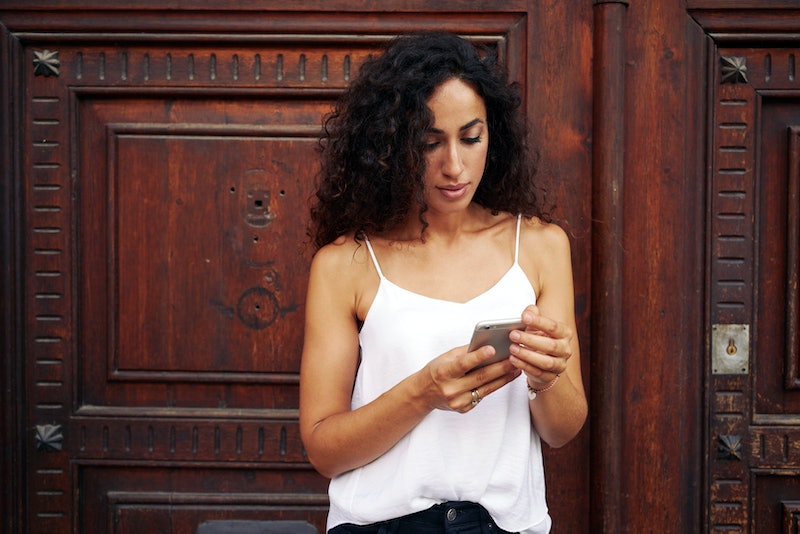 When it comes to the reasons why people use Tinder and other dating apps, it's really easy to write it off as they're looking for casual sex, but that's not really the case. Those stereotypes are reductive and inaccurate and certainly not everyone on dating apps is looking for a hookup.

"On the surface, the proliferation of hookup apps might make it seem seem as though romance is dead and all anyone (particularly men) is looking for is sex," relationship therapist Aimee Hartstein, LCSW tells Bustle. "But once we scratch the surface it seems that people are not that different today from how they always were... If most people try their best to be loyal and monogamous while in a relationship, why should they be any different just because the relationship was started from an app?"

And it turns out, the reasons aren't just limited to just sex or a relationship. Recent research in Telematics and Infomatics showed that there's actually a much bigger range of reasons people use Tinder. They looked at 266 people who are currently on Tinder, or had been in the past, and collected data on what they had used Tinder for and what the outcome had been from their experience on the dating app. Even though relationships and sex were definitely a big motivator, it didn't end there. Here are the reasons people decided to swipe, because it's not always what you think:

Even though they were both popular reasons, the researchers found that love was a stronger motivator than casual sex. Although, men were more likely to name casual sex as a reason for use than women.

No surprise here. People love the self-esteem boost they get from the app. I swear the reason people do more swiping and less chatting is the little endorphin rush you get when you get a match. I know lots of friends who have logged on when they've had a break up specifically for the confidence boost.

Excitement was another one that more male respondents identified with than female respondents did. Some of the draw of Tinder is just the fun in using it. Researchers suggested that the excitement could be the linked to the prospect of risky behavior like one-night stands, which may explain why it was more common in men.

Ease of communication was not a huge reason, but was cited by more men than women. Interestingly, some people found it easier to communicate online than offline. Maybe it's nerves or how much younger people are used to communicating online rather than in real life. God, I felt old just writing that.

Way down on the list is trendiness. But I guess a lot of people hear about it through word of mouth — or see their friends try it and have good luck with it— so I suppose that counts as "trendy".

Online dating is becoming a more and more of a common way to meet people, so I'm surprised that "lack of options" isn't a reason people could choose. But still, whether you're looking for love, lust, or just some excitement in your life, it's all just a swipe away.