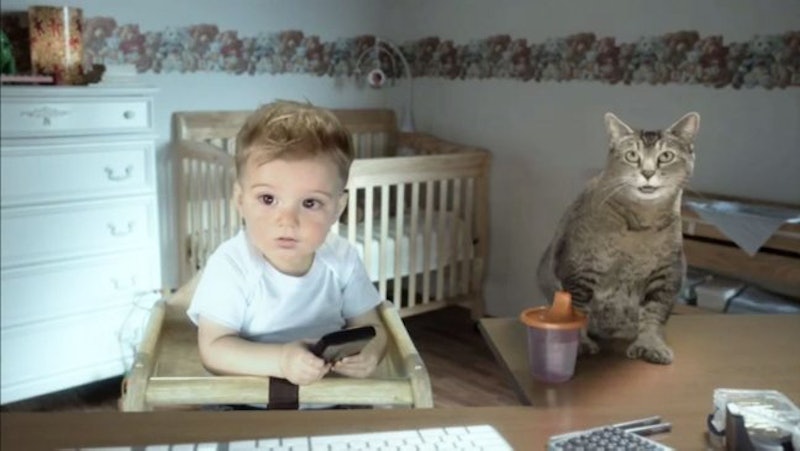 In a long-anticipated show of mercy, E-Trade will retire the creepy talking baby that’s been a staple of its advertising since 2008. In a new March Madness ad, the mascot — who looks like a baby but, unnervingly, speaks in the voice of a full-grown man — finds himself upstaged by a singing cat named Beanie. After protesting the cat’s antics numerous times without success, the man-baby announces his retirement, then throws his cell phone at the camera and/or the viewer. Let’s all take a moment to be grateful.

E-Trade introduced the talking baby during the Super Bowl seven years ago in a TV spot that opened with the baby talking about stock trading and ended with him vomiting on himself. As AP notes, without any apparent irony, “having a talking baby trade stocks was a way to show people that E-Trade's investing services were so simple even a baby could make money trading stock on the site.”

A swell idea and all, but the execution was bizarre from the start. The fact that the baby had the voice of a laconic man in his mid-20s was unsettling enough, but then E-Trade had to go ahead and animate his lips — but just his lips — to make it appear as if he was actually mouthing the words coming out of his mouth. This is something that a baby is physically incapable of doing in real life, and as a result, had a disturbing, uncanny valley-esque effect.

On the upside, Beanie the singing cat, in his brief appearance in the new ad, is delightful and charming. Let’s hope Beanie picks up where the talking baby left off.

More like this
'Breaking Bad' Duo Walt & Jesse Are Back — In This Super Bowl Commercial
By Jake Viswanath
Rihanna Tells Us To Shush About New Music In Super Bowl Halftime Show Trailer
By Jake Viswanath
Matteo Berrettini & Ajla Tomljanovic Split Shortly After Filming Break Point
By Brad Witter
Taylor Fritz's Girlfriend Documents Her Life With The Tennis Pro On TikTok
By Brad Witter
Get Even More From Bustle — Sign Up For The Newsletter
From hair trends to relationship advice, our daily newsletter has everything you need to sound like a person who’s on TikTok, even if you aren’t.