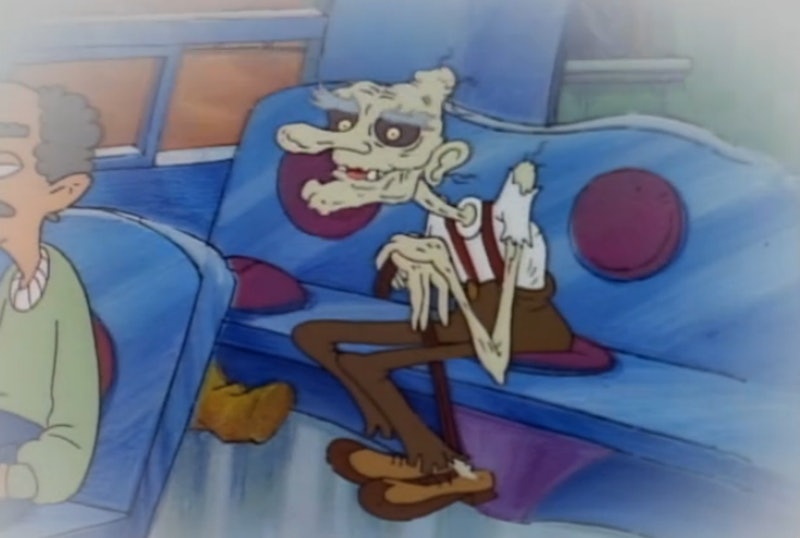 Even two decades after its debut on Nickelodeon, Hey Arnold! remains one of the realest cartoons of the ‘90s... and yet, it doesn’t get enough credit for the times it went surreal. On the mean streets of... wherever it was, somewhere Brooklyn-esque, a lot of strange urban legends would circulate, featuring tales of spectral brides and conductors alike. As a result, creepy Hey Arnold! episodes aren’t at all hard to find. From the episodes featuring mythic monsters and psychotic delusions to the just plain absurd characters, there are plenty to pick from — and just in time for Halloween.

But, where do you even get started? Well, at the risk of every sleeping soundly again, I took it upon myself to round up some of the scariest episodes of the animated series. From the utterly bone-chilling phantoms to the descents into madness to the just plain strange, it’s all here and ready for you. Well, they’re ready for you so long as you have a Hulu account or are willing to watch marathon after marathon in hopes of somehow catching the episodes in this exact order because are you listening, The Splat, this is the perfect line-up. I don’t know, I guess you can pick your poison when it comes to watching.

Anyway, without any more delay, these are some of the spookiest Hey Arnold! episodes. Marathon them if you dare.

This is one of the more gruesome urban legends in the Hey Arnold! catalog, as it features Arnold circulating a scary story at a sleepover about a decapitated cabbie. Harold's genuine fear and a series of strange coincidences lead the gang to believe the story may be true, and the episode definitely made me question if there was something sinister on the tail of a lost terrier. The big question haunting me, though: why is Eugene clog-dancing on the cobblestone street in the middle of the night?

The episode has a heartwarming conclusion (read: literally puppies and hand-holding) yet that doesn't undermine the fact that it features a horror all too familiar to New Yorkers: getting trapped on the subway. It may not properly convey the feeling of being sardine-packed on the L train during rush hour, but who hasn't thought, "we’re all gonna starve to death and get eaten by rats" when held up in a cabin lacking air conditioning? Oh, and the subway conductor teetering on the bridge of hysteria definitely amps up the anxiety factor.

I mean, I'm 99.9 percent certain that Helga's monkeynucleosis is all in her head. Regardless, watching that play out in her head in a fantasy sequence is somewhat disturbing. Not only is Helga All Of Us when we WebMD our head cold and think we're dying, but she gets a low-key Elephant Man moment when she proclaims, "I'm not an animal, I'm a little girl." You know what, I shouldn't have to make ties with David Lynch films and '90s cartoons. That belies something way too dark for a children's show.

The real life legacy of Emily Dickenson — which ended with her in all white, committing to a life of hermitage — is creepy enough. That statue condemning Phoebe with it's vicious chants of "cheater" is really something else, though.

If you're looking for an exceptionally dark (yet stylishly done) urban legend sequence, then look no further than this story of a fedora-ed strangler.

Hey Arnold! is rife with colorful characters — I mean, never forget that our main female protagonist is a stalker with a gum shrine — and somehow Curly manages to stand out as one of the actual crazy one. This is best showcased in "Curly Snaps" when the bespeckled weirdo has a psychotic break after getting passed up for ball monitor (a job that, admittedly, nobody else really likes doing) and locks himself in Principal Wartz's office.

"Weird cousin" doesn't even begin to cover it. Arnold's cousin Ernie is a dirt-giving, label-reading freak that off-puts just about everyone except Lila. Seriously, look at that dead-eyed Dollar Tree knock-off of the OG football head. No thank you. Also worth noting, Helga's involvement in making Lila jealous (getting foot rubs from Arnold, et al) is also pretty creepy, even for her.

I'm just glad that the Arnie sequel episode doesn't end with Arnold going to this town and witnessing some hideous ritual sacrifice. The flip-flopped Bizarro-Town Arnie lives in is still eerie. I elicit no joy from witnessing a dim-witted Phoebe and a grotesque Rhonda. Incidentally, Helga's entirely candid counterpart Hilda is a delight, yet her fatal flaw is falling for that soulless Arnie. Of course.

This one is certainly up for debate, since "Pigeon Man" is more of a poignant portrait of isolation than it is an outright horror show. The legend that surround the reality is far, far scarier. Still, if you look at the theory surrounding Pigeon Man's final flight, it definitely puts a ghostly shroud over the entire episode.

Even if you take the episode's ending as canon, you spend the bulk of "Sid The Vampire Slayer" laughing at Sid's fear of Stinky. I mean, the love of blood drives, the aversion to garlic, that's whatever. I'm more concerned about a nine year old's interest in taxidermy, but hey, that's just me.

There's nothing scary with the actual plot of "Part-Time Friends" (Arnold and Gerald clash while working at a flower shop, that's the entire story), yet it still elicits the most "NOPE" moment in the entire series. A dream sequence features an elderly Arnold and Gerald still feuding on the bus, and Arnold remarks that, "Sitting next to you is my worst nightmare." Uh, you know what, Arnold, I'm pretty sure your worst nightmare is the one where your corpse grandpa is in the back seat and his jaw falls off.

The "Ghost Bride" is just a bit too intense for your average Hey Arnold! urban legend. There is no "some say she's just a girl in a chicken suit" here to introduce some levity. This girl straight-up revenge murdered her sister and ex-fiancé with an axe, was found rocking and humming the "Wedding March," and then committed suicide. I wouldn't wanna be in a cemetery after that story, but surprise, that's where the neighborhood boys end up.

Uh, just look at that screenshot.

I just wanna be clear that there isn't anything actually scary in "Arnold's Halloween," it's simply a classic War of the Worlds homage, complete with an Orson Wellsian character in UFO Tonight's Douglas Cain. But eh, I guess it's worth an honorable mention if we're talking Hey Arnold! episodes for Halloween. Maybe.

Who else is gonna sleep with the lights on tonight?