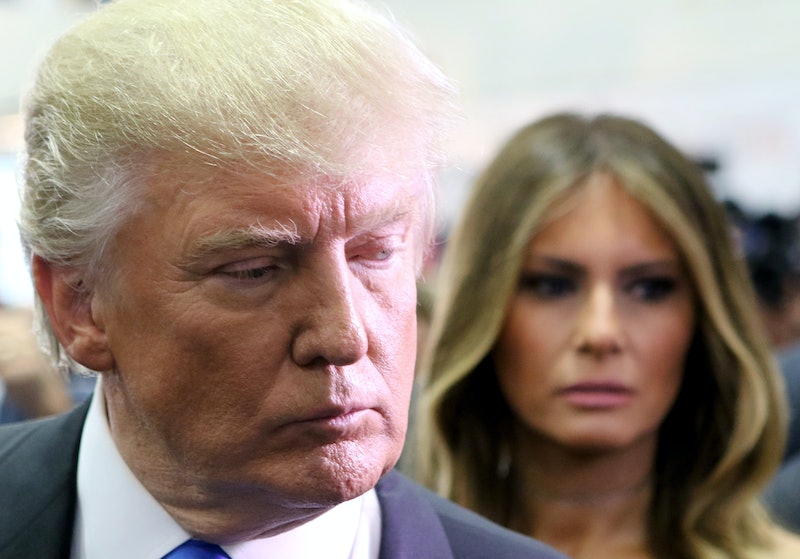 A video of Donald Trump saying sexist and lewd things about women to Billy Bush has surfaced after it was obtained by the Washington Post. And the transcript of Trump's conversation with Access Hollywood host Bush is rather disgusting, graphic, and triggering. "I did try and f--k her. She was married," is just one example of Trump's crude language throughout this video, which was filmed in 2005.

In the video, you can hear Trump bragging to Bush (and other unidentified people on the Access Hollywood bus) about his encounters with women — none of them his wife, Melania. Trump bragged about physical interactions with women, such as touching and kissing, and even detailed his futile attempts at having sex with a woman who wasn't Melania.

The video includes both visuals of outside the bus and audio from inside the Access Hollywood bus, as well as audio and video once Trump and Bush get off the bus and meet with Arianne Zucker, a Days of Our Lives actress who was showing the two around set before Trump's cameo on the soap. A microphone that was still on and recording reportedly is the reason this candid audio was captured, according to the Post.

In the video, Trump also argues, when talking about his attempts to have sex with women, that “when you’re a star, they let you do it.”

Here's the full transcript of the video:

Trump: "You know and I moved on her actually. You know she was down on Palm Beach."Unknown: "She used to be great. She's still very beautiful."

Trump: "And I moved on her very heavily. In fact, I took her out furniture shopping. She wanted to get some furniture. I said, ‘I’ll show you where they have some nice furniture.’"

Trump: "I moved on her like a bitch, but I couldn’t get there. And she was married. Then all of a sudden I see her, she’s now got the big phony tits and everything. She’s totally changed her look."

Trump: "I’ve gotta use some Tic Tacs, just in case I start kissing her. You know I’m automatically attracted to beautiful — I just start kissing them. It’s like a magnet. Just kiss. I don’t even wait. And when you’re a star they let you do it. You can do anything."

Unknown, but apparently Bush: "Whatever you want."Trump: "Grab them by the p---y. You can do anything."

Trump: "It's always good if you don't fall out of the bus. Like Ford. Gerald Ford, remember?"Bush: "Down below. Pull the handle."

Trump: "Hello. How are you? Hi."Arianne Zucker: "Hi Mr. Trump. How are you? Pleasure to meet you."Trump: "Nice Seeing you. Terrific, terrific. You know Billy Bush?"Bush: "Hello, nice to see you. How you doing, Arianne?"Zucker: "I'm doing very well, thank you. [To Trump] Are you ready to be a soap star?"Trump: "We're ready. Let's go. Make me a soap star."

Trump: "Come on, Billy, don't be shy."Bush: "As soon as a beautiful woman shows up, he just takes off. This always happens."Zucker: "I'm sorry. Come here."Bush: "Let the little guy in here, come on."Zucker: "Yeah, let the little guy in. How you feel now? Better? I should actually be in the middle."Bush: "It's hard to walk next to a guy like this. Yeah, you get in the middle. There we go."Trump: "Good. That's better."Zucker: "This is much better. This is —"Trump: "That's better."

There's nothing "good" about this entire conversation. These disgusting comments just reaffirm most of the public's view of Trump and the way he thinks about, interacts with, and speaks of women. As of Friday, the New York Times reports that Hillary Clinton has an 82 percent chance of becoming the next president.