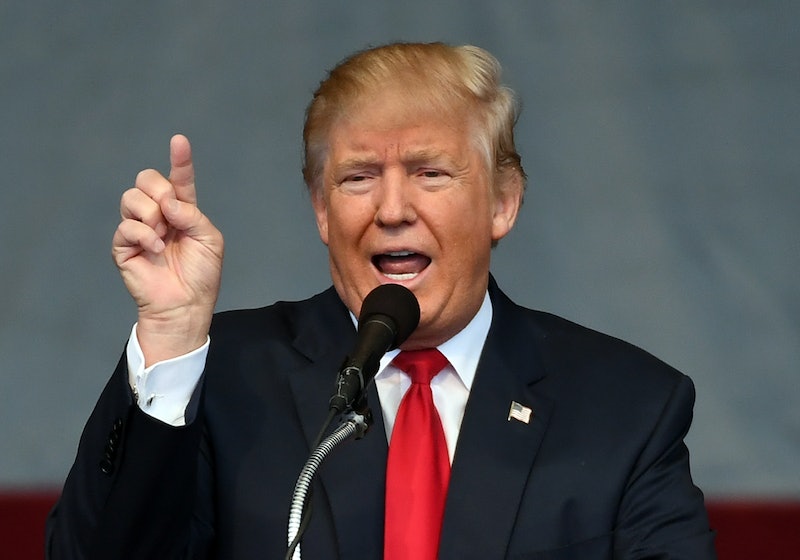 If you haven't heard the thoroughly disgusting new Donald Trump audio that the Washington Post released, and if you've got the stomach to listen to some deeply repellent, wildly sexist chatter, then you should check it out. You can rest assured it's going to come up in some form during the second presidential debate, too. And the story isn't just about Trump ― the degrading comments came in a conversation with TV and radio host Billy Bush, whose enthusiasm at Trump's sexist vulgarity highlights a very important point: that men should hold each other accountable for sexism.

By ignoring these comments, men are failing women. In private moments, whether hidden behind closed doors, or spoken in hushed tones in close proximity, Trump and Bush's back-and-forth has exposed an important facet of toxic masculinity, rape culture, and the willingness of some men to simply laugh and play along, rather than call out disgusting behavior.

First thing's first, the comments themselves: In a recording from 2005, Trump bragged explicitly to then-Acess Hollywood host Bush about what was absolutely predatory sexual behavior. Specifically, Trump discussed pursuing a married woman ― or, as he put it, tried to "f--k her" ― and from the sounds of things, he doesn't have any knowledge of rules of consent, much less respect for it.

This is just an example of how Trump openly promoted sexual assault as Bush listened and responded enthusiastically rather than held him accountable for his dangerous comments. Said Trump:

I move on her, and I failed. I admit it. I did try and f--k her. She was married. ... I moved on her very heavily, in fact I took her out furniture shopping. She said she wanted to get some furniture, I said 'I'll show you where they've got some nice furniture.' I took her out furniture, I moved on her like a bitch. But I couldn't get there, and she was married. And all of a sudden I see her, and she's got the big phony tits, she's changed her whole look.

The comments are unnerving on their own, but especially so when you consider it's about Trump, the thrice-married father of five, doggedly trying to have sex with a married woman under the false pretense of going furniture shopping. At this point, rather than express any mild discomfort at this conversation, Bush went entirely the other direction.

Spotting a woman dressed in purple ― according to Fahrenthold, they were talking about Arianne Zucker, a soap opera actress who was meeting them to shoot a segment ― Bush giddily told Trump, "Whoa, your girl is hot as shit," adding "yes, the Donald has scored!"

Then, the most disturbing part of entire chauvinist exchange: Trump comments on how he sometimes "just kisses" women, saying "I don't wait."

This exchange is a clear example of Trump rhapsodizing and romanticizing sexual assault, without Bush even making a peep of an objection; instead, he laughed and continued along with the objectifying banter. Also, it's worth noting that this recording was reportedly taken in September 2005, about nine months after Trump's wedding to his current wife, Melania.

In short, this recording provides a tidy case study for any man who wants to be a better feminist, or a better human being, really. If you're hanging out with a man, whether they're rich and powerful or not, and they start talking like this, you should do all of us a favor and speak out against that. And not just if said man (or men) are using crude language about finding someone sexually attractive — but, of course, if they're saying that they like to "grab [women] by the p---y," because they "can do anything," and they're not showing any regard for the common boundaries of decency, consent, or humanity, you've got a few choices on how to deal with that.

One, you can voice your disapproval, challenge them to justify and further explain their admission of violating and unacceptable behavior, and make it clear that you're disgusted. In short, they can't just assume you're cool with it because you're a man, because that's not how a man should be.

Or, to borrow a Trump phrase, "you can tell them to go f--k themselves." But there's not much space in between. And, as the world now knows, Bush failed that test. Instead of being the voice of humanity and decency, he decided to play along as Trump's toady, a cheering section for a shameless, irredeemable vulgarian. Make no mistake: You just got to hear the real Donald Trump. And if men across America want to be worth a damn, they must reject him and stand up for women whenever any man makes comments like this.