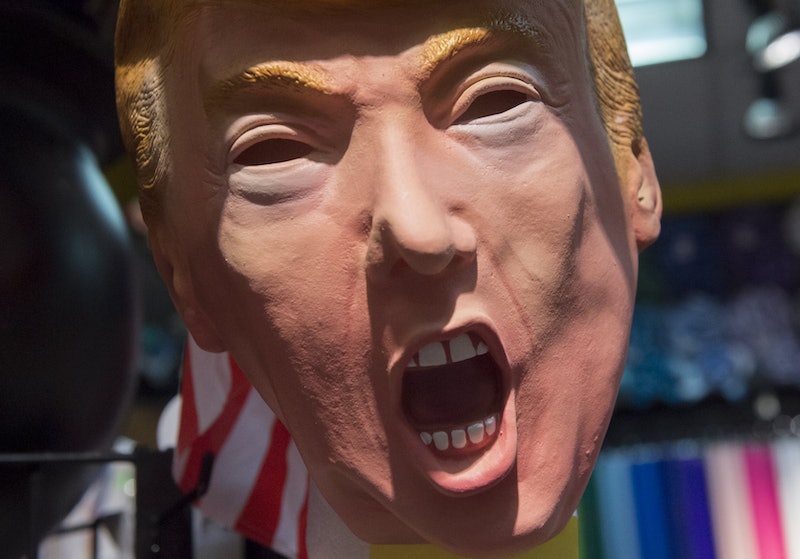 On Friday, The Washington Post published a recently-unearthed audio clip of Donald Trump saying terrible things about women. That shouldn't be a huge surprise, but even against Trump's lengthy history of misogyny, these comments, which he made in 2005, really take the cake. The entire thing is hideous and incriminating, but there's one particular quote from Trump's conversation with Billy Bush that perfectly illustrates three of the GOP nominee's worst qualities: His general sense of entitlement, his rank hypocrisy, and his belief that women's bodies exist solely for his own pleasure and benefit.

The entire three-minute recording, while thoroughly vile, is worth listening to, but there's one line that's especially awful. Here it is, in context; I imagine you won't have any problem identifying which line I'm referring to:

Where to even begin with this? The entire thing is a heap of sexist garbage, but I'll try my best to address each of its many problematic dimensions one by one.

In the most general sense, Trump’s comments illustrate his long-held sense of personal entitlement — his belief that, by sheer virtue of being Trump, he deserves whatever he pleases, and no less. This has been evident throughout the campaign, and was encapsulated most succinctly by Trump himself, who had this to say in 2015 when he was accused of “whining.”

“I do whine, because I want to win,” Trump said.”I'm not happy about not winning, and I am a whiner, and I keep whining and whining until I win.”

This is a man who believes that he inherently deserves what he wants, and his 2005 comments about women make that clear. "I don't even wait," he said. "You can do anything." Because in Trump's mind, he should and does get to do whatever he wants to do.

Moreover, the comments illustrate Trump's hypocrisy, and they do so in multiple ways. Back in March, for example, Trump complained about a reporter who allegedly grabbed him during a press scrum. "Why is she allowed to grab me and shout questions," he complained on Twitter. "Can I press charges?" But as evidenced in his 2005 comments, he seemingly has no problems with grabbing women's genitals uninvited. The difference, apparently, is that Trump is "a star."

On the same token, Trump frequently criticizes Bill Clinton for his marital infidelities, and accused him of having a "terrible record of women [sic] abuse." More recently, he suggested that Hillary has cheated on Bill. In the 2005 audio, however, Trump bragged about being able to grope women without their permission and, earlier in the clip, casually remarked that he tried to sleep with a woman who was married. It seems that these sort of things are perfectly acceptable in Trump's eyes, so long as he is the one doing them.

This brings us to perhaps the worst part about Trump's comments, and that's the flagrant level of misogyny and sexism that they reveal. Really, those words don't quite do it justice, because Trump's misogyny is more specific than that: Time after time, he has suggested that he doesn't value women as autonomous human beings, but rather as physical objects who ought to be judged solely on their bodies. Here is just a partial list of comments he's made about women, all of which he made on the record and, in some cases, on video:

And that's only what he's said on-record — Trump has been accused of making plenty more misogynistic comments by past associates. One of them was former Miss Universe winner Alicia Machado, who said that Trump called her "Miss Piggy" because she gained weight after the beauty pageant. She also says that he called her "Miss Housekeeping," presumably because she's Hispanic, but Trump's racism is another topic for another day. Trump's 2005 remarks that "you can do anything" to beautiful women, including groping them without permission, was perfectly in line with the totality of his comments about women, which make clear that he assesses them not as people, but as objects that exist for his own pleasure.

To be sure, all of this — Trump's narcissism, hypocrisy and misogyny — was evident long before this most recent audio clip surfaced. His 2005 remarks only serve to highlight what we already know, and what we know about Trump is disqualifying for a presidential candidate.