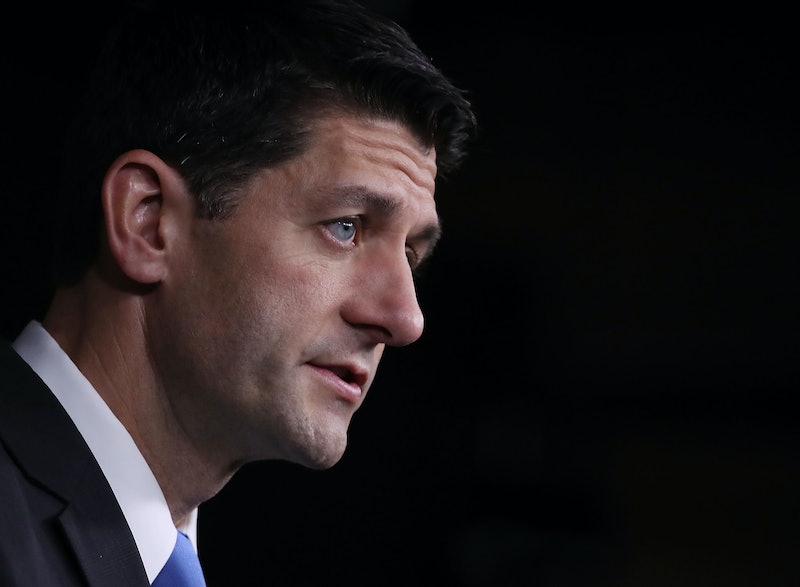 On Friday, hours after the Washington Post published a conversation in which Donald Trump made several crude and sexually aggressive remarks about women, House Speaker Paul Ryan denounced the Republican presidential candidate. He also booted Trump from a Wisconsin GOP event that was scheduled for Saturday.

“I am sickened by what I heard today," Ryan said in a statement. “Women are to be championed and revered, not objectified. I hope Mr. Trump treats this situation with the seriousness it deserves and works to demonstrate to the country that he has greater respect for women than this clip suggests. In the meantime, he is no longer attending tomorrow’s event in Wisconsin.”

In his exchange with then-Access Hollywood host Billy Bush, Trump recounted his efforts to "try and fuck" a married woman. “I moved on her like a bitch, but I couldn’t get there. And she was married," Trump said. "Then all of a sudden I see her, she’s now got the big phony tits and everything. She’s totally changed her look.”

Trump and Bush were arriving on the set of Days Of Our Lives. When they appeared to spot cast member, Arianne Zucker, Trump talked about how he needed to to take some Tic Tacs in case he kissed her. "You know I’m automatically attracted to beautiful — I just start kissing them. It’s like a magnet. Just kiss. I don’t even wait,” Trump said. “And when you’re a star, they let you do it.You can do anything.”

He then added, “Grab them by the pussy. You can do anything.”

Ryan is hardly the only Republican to slam Trump for this latest revelation. Illinois Sen. Mark Kirk went so far as to say Trump should withdraw from the presidential race and the Republican party "should engage rules for emergency."

More like this
Katherine Ryan Has The Funniest Response For Those Who Doubt Her Husband
By Alice Broster and Darshita Goyal
Iran Has Issued A Death Sentence Over Mahsa Amini Protests
By Catharina Cheung, Darshita Goyal and Maxine Harrison
Amanda Gorman Shared A Powerful Message On Meghan Markle’s Penultimate Podcast
By Darshita Goyal
Wimbledon Alters All-White Kit Rule Amid Candid Period Discussions
By Catharina Cheung and Rachel Mantock
Get Even More From Bustle — Sign Up For The Newsletter