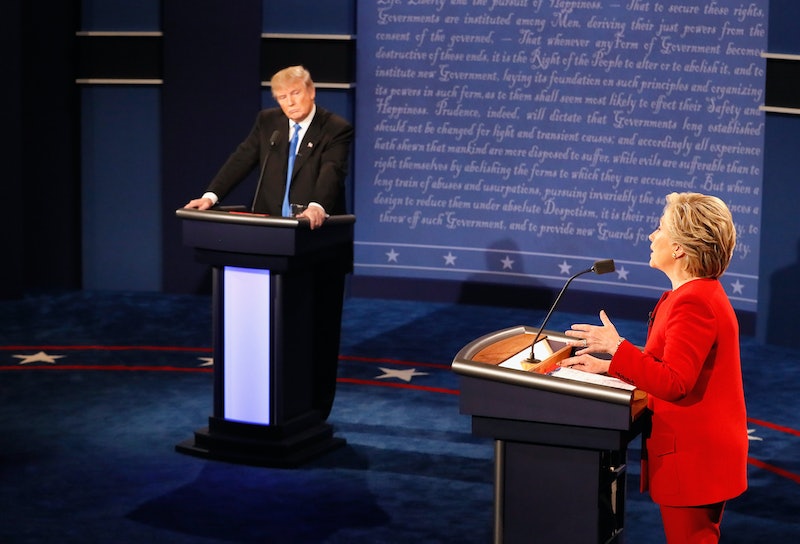 Every once in a while, a big life event comes along that stresses us the hell out — a divorce, a sudden change in career, or a family member getting sick can royally shake things up and temporarily make us feel like everything is going to fall apart. It seems like the whole country is collectively going through one of these crises at the moment, though — the 2016 presidential election. We're all freaking out, most likely about the prospect of Donald Trump becoming president, and tormenting ourselves with worry that the words he's already said have had a profoundly negative effect on the whole country. It's enough to keep us up at night and rob us of our beauty sleep.

Stephen Holland is a clinical psychologist who has more than 25 years of experience working in Washington, D.C., and he told the Atlantic, "I’d say probably two-thirds to three-quarters of our patients are mentioning their feelings about the election in session." The proof is in social media, where everyone on Twitter and Facebook is expressing their panic over this election. And the news often doesn't help, with constant, fear-driven coverage of the Trump v. Clinton battle and the state of our nation.

So what can we do? I mean, other than tweet away our anxiety? I'm a nervous millennial, so I'm well aware of the struggle. But I'm also a yoga teacher, so I know that there are ways to reduce our stress by simply controlling our breath. Yes, even election-related stress. If you don't believe me, believe the studies that have been conducted. For example, 69 individuals who battle an anxiety disorder participated in a two week workshop in which they practiced several different breathing exercises, most of which are included below. After the workshop ended, they continued to practice the breathing exercises at home on their own for the next six months. When they were evaluated at the end of the six month period, researchers found that their anxiety scores reduced by 44 percent. Now it's your turn to give it a try.

Here are five breathing techniques that will help you get through this election season in one piece.

Sounds pretty simple, right? Well, breathing in and out through your nose in a steady manner isn't always so easy when the stress is weighing down on your shoulders. We often either forget to breathe altogether or we erratically breathe in and out through our mouths, as if we're gasping for air. This kind of breathing exacerbates whatever anxiety you've got going on internally, and it activates the sympathetic nervous system, which is also called the "fight or flight" response.

By intentionally inhaling and exhaling through your nostrils, you switch up your body's responses and tap into your parasympathetic nervous system, also known as your trusty "rest and digest" button. This will help you chill the eff out, and you won't be nearly as terrified about the Clinton-Trump battle as you were when you panting out of your mouth.

How To Do It: Start by emptying out your lungs. Slowly inhale through your nose for a count of five, then exhale out of your nose for an equal count of five. You can even close your eyes if you'd like. You can do this anywhere — at your desk, in your car, at the dinner table. Try to listen to the sound of your own breathing as well, which will prevent your mind from wandering off to some outlandish thing Trump said in the last debate.

When you purposely elongate your exhales, not only do you exhale more toxins, but you also activate your vagus nerve, which in turn prompts your parasympathetic to take over for a while. As a result, your muscles relax and your stress hormones start to dissipate. Practice this breathing exercise often enough, and you'll feel so much of a difference that you may rely on it in moments of extreme anxiety.

How To Do It: Inhale through your nose for a count of two, then exhale through your nose for a count of four. Start with this ratio and see how it feels. If you feel like you're gasping for air at the end of the exhale, start by inhaling for one count and exhaling for two. Gradually work your way up to higher numbers. Just remember to keep the breath smooth and steady.

If you've ever gone to a yoga class, you've probably heard the teacher say something at the beginning about tapping into your ujjayi breathing — and you probably had no idea what the hell they meant. Ujjayi, which translates to "victorious breath," is a technique yogis have been using for centuries to calm their bodies and minds, and prepare for deep seated meditation. It gets the blood flowing in a healthy way, increases the amount of oxygen in your body, and relieves physical tension. It's also a great way to focus your mind inward.

How To Do It: Ujjayi is all about constricting the back of your throat when you're breathing. It should be loud enough for the people next to you to hear. To get the feel for what it should be like, open your mouth and make the sound "Haaah" as if you're trying to fog up a mirror. Now close your mouth and elicit that same feeling in your throat, only this time breathing in and out through your nose with your mouth closed. You should be able to hear it pretty clearly. Breathe very slow, even breaths using this method for a few minutes — even better if your eyes are closed.

If nothing else, this particular exercise will teach you how to breathe so consciously that you'll forget entirely about whatever it is that's stressing you out at the moment. It takes quite a bit of concentration — in a good way. Nadi shodhana, more commonly called alternate nostril breathing, fuels your parasympathetic nervous system, lowers your blood pressure, and strengthens your respiratory function. It will definitely take some practice to master, so don't be discouraged if you can't get the hang of it right away.

Kapalbhati is considered to be an advanced breathing technique by some, but I encourage everyone to try it, no matter how long they've been doing yoga or practicing breathing exercises. In Sanskrit, kapalbhati means "skull shining breath," and it's meant to clean out the toxins, clear your mind, and strengthen your core muscles. Try to relax your facial muscles while you're doing this, even if it feels like a struggle at first.

How To Do It: The focus is entirely on your exhale in this exercise. Your exhales will be sharp and strong, and they'll come out of your nostrils. Don't think too much about your inhales, as they will happen automatically. Start by inhaling through your nose, until your lungs are about halfway full. Then expel 60 short exhales out of your nostrils, all the while using your diaphragm. You should feel your belly contracting and expanding with every exhalation. As with anything else, don't go at super sonic speed at the beginning. Start slowly, and you'll eventually work your up to being a kapalbhati breathing master — and maybe, if you work hard, someone who was actually able to forget about the election for an hour.