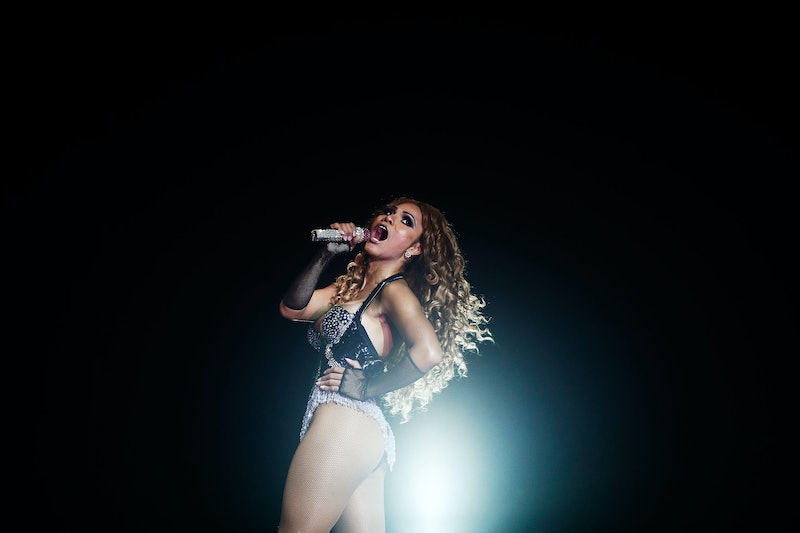 Where were you on Friday, Oct. 7? If you say literally anywhere other than Beyoncé's last "Formation" tour show, then you are pretty much the only person who wasn't there. I mean, OK, not really, but after reviewing the number of celebrity guests at Beyoncé's last "Formation" show, it feels a lot like those of us who weren't there were the only ones. Because my goodness, Beyoncé is popular. If you were in any doubt that she's the reigning prom queen of the music world, then let's put the topic to rest right here, right now.

The final stop on the tour took place at East Rutherford, New Jersey, and it included all sorts of surprises and celebrity appearances. Firstly, tennis star Serena Williams took to the stage to dance while Beyoncé performed "Sorry" (which was cool, because she danced in the music video to the same track). Kendrick Lamar was up next to perform "Freedom." And, if you've been worried about Jay Z and Beyoncé's relationship ever since Lemonade dropped, Beyoncé really wants you to chill out about it — Jay Z performed "Drunk In Love" with her. But the celebrity count didn't stop there. Beyoncé's friends, the great and good from the worlds of music and cinema and television were out en masse. Let's review.

When your backing dancer's one of the most talented women in sport.

Then Check Out Williams' Outfit Closeup

After checking out the snap, my new week's resolution: more glitter. Always and forever, more glitter with every outfit.

Those tights, though. #want

Probably one of the few people in the universe who can match Beyoncé's energy.

Beyoncé And Jay Z Soothe All Your Fears

Three minutes in, Mr Carter enters and the crowd completely loses it.

Hugh Jackman Was There, Because Obviously

Had no idea Jackman was a Beyoncé fan, but then, well, who isn't?

Frank Ocean Was There

I assume Ocean only exited his recording studio to drop fully-realized albums full of genius, not to check out other people's music. This is BIG.

Ja Rule And Tyler Perry Were There

Literally everyone apart from you was there. Shh, shh, it's OK. Maybe next time you'll be there, too.

Taylor Schilling Was There

Like the trying hard to be incognito in a laid-back leather jacket. Nice try, superstar.

Not totally unexpected, given her Lemonade cameo.

So I think we can all agree: Beyoncé isn't just a multi-millionaire with a searing and original creative vision. She's also the most popular woman on the planet. Here's to whatever's next for the queen — can't wait to see more great material and famous faces.