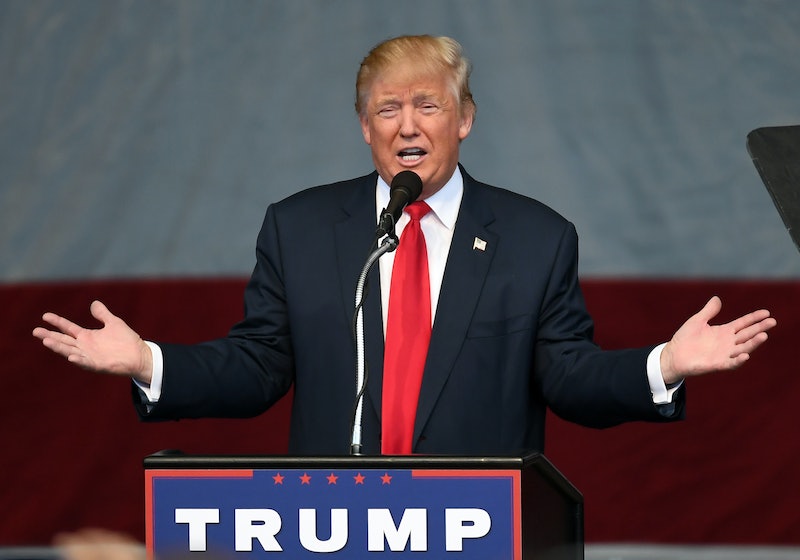 By now you’ve probably heard about Donald Trump’s latest fiasco — the leaked recording in which he and Billy Bush are heard having a vulgar conversation about their sexual treatment of women. The most damning quotes from the tape are Trump’s words about being able to do “whatever you want” to women when you’re a “star” — including “grab[bing] them by the p---y — and his his confession that he “doesn’t even wait” to kiss beautiful women he’s attracted to. It's a clear way of condoning sexual assault, which made it all the more unnerving when, in his apology, Trump suggested sexual assault isn't an important issue.

After the recording’s release, Trump published a 90-second video apology promising to be a better man. It was a well-crafted statement covering all the necessary bases: acknowledgment of wrongdoing, insistence of being a changed person, mentions of everyday Americans, reminder of his political stances, and, of course, an attack on his campaign opponent. Yet none of that mattered the second he made a highly-objectionable statement: “Let's be honest, we're living in the real world. This is nothing more than a distraction from the important issues we're facing today.”

These words illustrate, once again, how little the nominee knows (or cares) about women’s issues.

The conversation between Trump and Bush exposes Trump for shamelessly partaking in sexual harassment and sexual assault. By referring to this as “a distraction” and insisting that we should instead focus on “the important issues,” he’s dismissing sexual assault as a trivial matter.

Try telling that to the one in six American women who become a victim of rape or attempted rape, 94 percent of which experience post-traumatic stress disorder, while 33 percent attempt suicide, according to RAINN. Thanks to biases in our justice system, only six out of every thousand rapists are incarcerated.

For Trump to disregard the importance of this issue shows he either has no understanding of the severity of the myriad problems that arise from rape culture, or he wants to diminish his own wrongdoing — which he does again later in the video when he says that Bill Clinton has “actually” abused women, as if the actions he describes in the leaked reporting don’t count as “actual” abuse. It seems Trump just wants the public to be persuaded to focus on less “trivial” things.

If those with the power to change laws and policies remain ignorant or indifferent toward sexual assault, how is the system supposed to change? Especially when we have a man who thinks that sexual assault isn't an important issue and he's seeking the most powerful office in our country. The problem is propagated by politicians who pay lip service to the public and then uphold the status quo. With audio evidence of his misogyny and a statement trivializing sexual harassment and sexual assault, Trump has made it clear that he has no regard for women or for their safety.