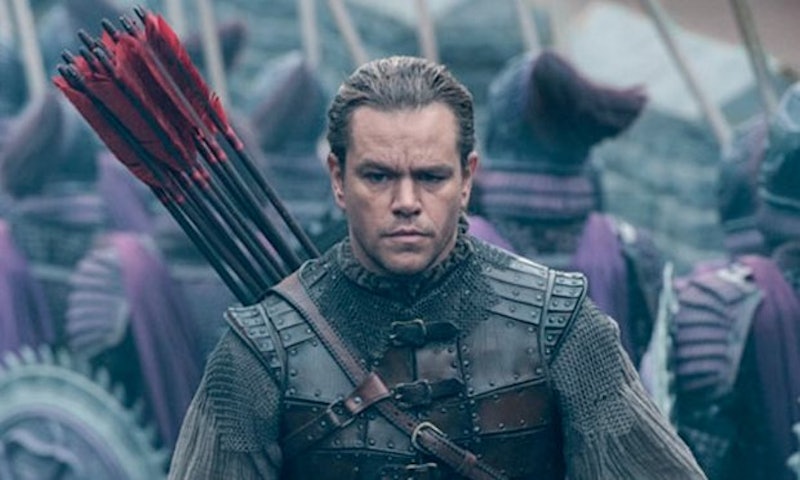 It's been a couple of months now since controversy surrounding the accusations of whitewashing in The Great Wall , Zhang Yimou's new film starring Matt Damon in a lead role, came out following the release of its trailer. Though the footage which provoked the criticism was only a teaser, it was enough for viewers to raise concerns about what Damon's starring role would be in a film so embedded in Chinese culture and starring a predominantly Chinese cast. But, could there be more to the story which could put to rest audience concerns regarding the controversy? Bustle is currently at New York Comic Con, where The Great Wall panel (featuring Damon himself) directly addressed the whitewashing accusations, and it certainly sounds as though the backlash isn't something that any of the team is taking lightly.

When asked about the accusations which directly followed the release of the teaser trailer, Damon provided a brutally honest response:

"It was a f*cking bummer... but I had a few reactions. I was surprised, I guess because it was based on a teaser, it wasn't even a full trailer, let alone the movie... I do try to be sensitive to that... We're all guilty of whitewashing, we all know only the Chinese defended the wall against the monsters when they attacked ... We were wounded by it, we do take that seriously."

Damon's assertion that he was surprised at the backlash based upon the small amount of footage teased by that first trailer is understandable. It can be difficult to fully express context or intent within a trailer of that length in order to sufficiently portray a film as it really is.

Addressing the possibility of continued whitewashing backlash when the film is released, Damon provided what sounded like a truly sincere affirmation:

"I will listen to that [controversy] with my whole heart, and I will think about it, and i will learn from that... I will be surprised if people see this movie and have that reaction, I will be genuinely surprised."

Damon's statement seems to echo the one that The Great Wall filmmaker Zhang Yimou released to Entertainment Weekly on Aug. 4, after the backlash initially erupted:

In many ways The Great Wall is the opposite of what is being suggested. For the first time, a film deeply rooted in Chinese culture, with one of the largest Chinese casts ever assembled, is being made at tent pole scale for a world audience. I believe that is a trend that should be embraced by our industry. Our film is not about the construction of the Great Wall. Matt Damon is not playing a role that was originally conceived for a Chinese actor. The arrival of his character in our story is an important plot point. There are five major heroes in our story and he is one of them — the other four are all Chinese. The collective struggle and sacrifice of these heroes are the emotional heart of our film. As the director of over 20 Chinese language films and the Beijing Olympics, I have not and will not cast a film in a way that was untrue to my artistic vision. I hope when everyone sees the film and is armed with the facts they will agree.

It's worth noting, also, that the new trailer for The Great Wall was released on Saturday (the same day as the NYCC panel) and does provide a lot more footage with which to base a more solid first impression upon. Though the actual full story of the film remains a little vague, the white American actors of the film are framed a little differently than Damon was in the teaser trailer.

They're obvious lead characters, but they don't appear to be depicted as the central heroes of the narrative. Instead, that role appears much more clearly to have possibly been appointed to Jing Tian, who plays the leader of the Chinese army.

Speaking about her character at the NYCC panel, it's clear that Tian is proud of her role and of the inclusive representation that her character provides to the movie. Tian stated that her role is of "an incredibly powerful female character ... very strong, brave, and determined," and that one of the things she loved most about the movie was "the equality between the men and the women in leadership roles." She then elaborated with the statement, "the respect that all of these warriors had for one another regardless of gender is something I wish we could see more of in film and in real life." Which is definitely a positive aspect of the film worth celebrating amidst all the controversy.

As Yimou also explained, there are other cultural positives worth celebrating from the production of The Great Wall, which may not have been considered between all of the backlash:

"I think the Chinese audience will really look forward to this movie... it’s the biggest collaboration ever, it’s a really unique opportunity… if this movie succeeds, it’s gonna benefit the Chinese and American film business, it’s gonna create a new app to collaborate, and we’re gonna work much more closely together."

It remains to be seen how The Great Wall will really handle the issues that are being discussed (and how Damon, Yimou and the rest of the team will respond should that be the case) — we'll only find out when the film is released in theatres February 2017. But judging from these comments, the film appears to be striving for not just positive and inclusive representations but also greater collaborations between the American and Chinese film industries as a whole. Moving forward, those are both decisions worth commending.