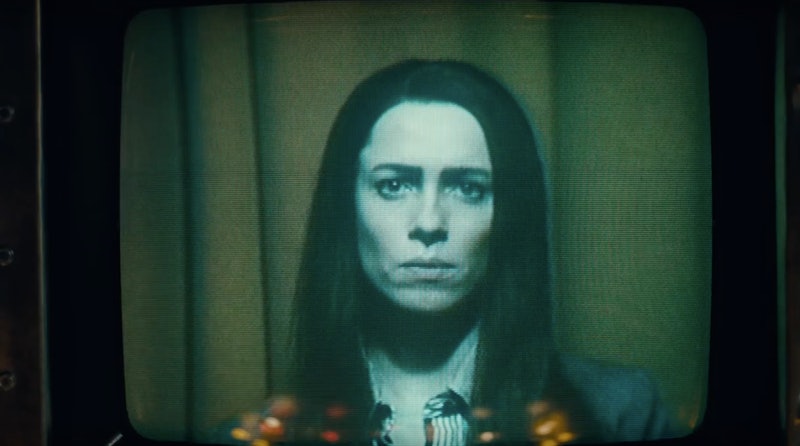 On July 15, 1974, news reporter Christine Chubbuck took a gun to her head and committed suicide on live television. She was only 29 years old. Understandably, the footage has become a “Holy Grail” that’s nowhere to be found, and as one theory suggests, due to the request of Chubbuck’s family. Forty-two years later, the story resurfaced as actress Rebecca Hall was put in the anchor seat for the biopic Christine , and was physically and emotionally tested beyond belief — not only by living the horror of Chubbuck’s suicide, but having to reenact it on camera.

The role, and difficult scene in particular, was without a doubt the furthest Hall had to push herself thus far in her career. Getting into Chubbuck’s psyche, holding up the gun, channeling the physicality, and having fake blood rush out of her caused the actress to uncontrollably shake for 24 hours after shooting. Although Hall accessed the darkest part of the late reporter, and even herself, she understands why Chubbuck did the unthinkable act, and explained how it was a heroic one for “someone who desperately want[ed] to live.” To Hall, Chubbuck’s story isn’t just about a suffering woman, it’s an “every man film” tapping into realities of depression and societal issues.

When taking on the massive responsibility of playing the late Chubbuck (who Hall said is survived by two living relatives), giving an accurate portrayal while respecting the late reporter was important to her. But perhaps the most significant task was making audiences empathetic for someone so “unlikable.” “It’s crucial to humanize the ones we have a hard time understanding and that we would be more comfortable looking away from,” the 34-year-old said. “I wouldn’t have done it if it wasn’t animated by this heartbeat of compassion towards this woman.”

Hall was brilliant in portraying Chubbuck, not a bad person, but a defeated one. She was a woman who often suffered in silence from her lack of intimate relationships, infertility problems, and of course, suppression at the workplace. Chubbuck wanted to report positive, human interest stories. The network wanted juicy, boundary-pushing headlines. Constant failure to meet that expectation was exhausting. Hall pointed out that while researching for the film, she came across studies from the early ‘70s which triggered the second wave of feminism, and found correlation between female depression and feminism. “There was this dramatic spike in depression in women during that time, getting their freedom and going, ‘I can’t have it,’” Hall said.

Although Hall explained that the film is about “humans in general,” she understands why surrendering would make sense for someone like Chubbuck—a passionate female reporter in the ‘70s—because being bound to the limitations and hardships of life at that time seemed impossible. “Everyday there’s a fight to get through the day and not [kill herself]… The film came to this conclusion to me, that felt, tragically logical,” said Hall. In the film, Chubbuck fights her many fights, until she finally grows too tired to continue trying. “Like she walks out [saying], ’The world operates like this. Then I’m not about to survive. So I guess I’m out,’” Hall said.

Hall, who grew very attached to her character, felt an overwhelming sense of conflicting and intense emotions during the process — one of those emotions was sadness, especially during the suicide scene. The actress said she “knew [she] was about leave and kill her” and felt terrible remorse. “I wanted her to survive,” she said.

Ironically, when Hall did have to kill her character, she oddly felt relieved. “[The relief] came from that incident of sort of letting go… it’s when she feels her most relaxed and is most herself. She knows what she’s going to do. It was sort of calm,” said Hall.

In my conversation with Hall, her passion and drive to shine a light on an "antihero" like Chubbuck was clear from the start. By bravely speaking to Chubbuck's suicide and revealing how she understands it, she's succeeded in more ways than perhaps she even set out to.