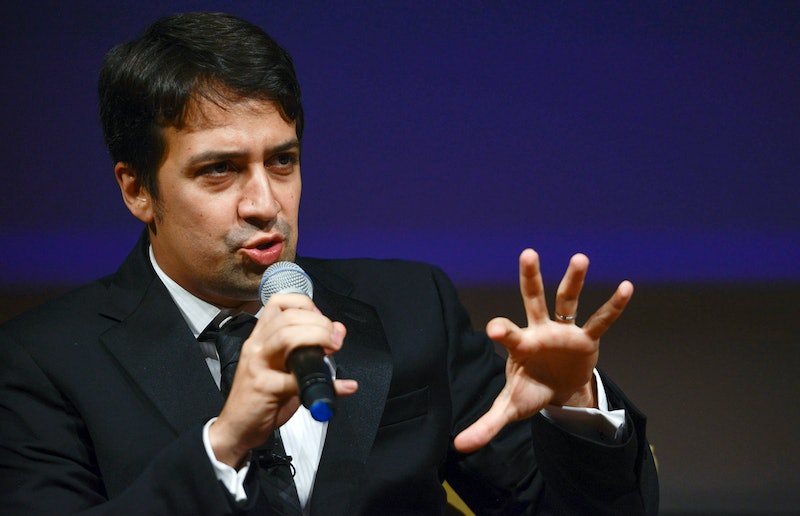 As Donald Trump tweeted Saturday morning, "it's certainly been an interesting 24 hours!" And there was perhaps nothing better to cap off this insane week than Lin-Manuel Miranda's Hamilton -inspired rap on Saturday Night Live. The Broadway star made his SNL debut by remixing Hamilton songs "My Shot" and "The Reynolds Pamphlet," throwing in the perfect reference to a certain Republican candidate's recent, increasingly obvious plight: he's "never gonna be president now."

Miranda used the SNL opening to make sure that he didn't throw away his shot to skewer Trump. As he rapped through the halls of the set, Miranda made his way along a row of photographs that displayed the show's recent hosts. After passing by hosts like Amy Schumer, Miranda pauses to stare wide-eyed at the photo of Trump, who hosted SNL last year despite outcry from fans. He then launches into the iconic lyric from "The Reynolds Pamphlet," singing a round of "never gonna be president now." In the Hamilton musical, the song comes after Alexander Hamilton reveals that he's had an affair, thereby destroying his chance to become president. A pretty fitting tribute for Trump, after the week he's had.

Twitter thought so too, quickly declaring "The Reynolds Pamphlet" shout out as the best moment of the night.

People Were Already Thinking It, Too

After this "interesting 24 hours," it certainly seems like that Miranda's lyric was written for Trump himself.