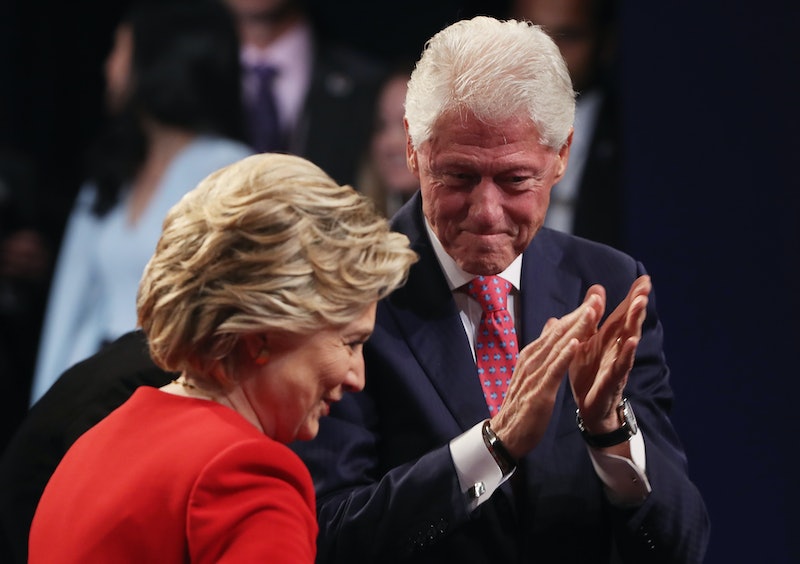 While the biggest question leading up to Sunday night's debate is undoubtedly how Donald Trump will handle the leaked tapes that shocked the nation (or at least the parts of the nation that hadn't noticed his history of misogyny), a different topic may also be on your mind: Is Bill Clinton at the second presidential debate? Although Hillary Clinton's husband (and former POTUS) didn't attend any of her debates during her first presidential campaign in 2008, he made an appearance in the audience at the first debate between Hillary and Donald Trump on Sept. 26. Two weeks later, the second Trump-Clinton debate will take place on Oct. 9 at 9 p.m. ET. Update: Bill Clinton did attend the second presidential debate.

With that in mind, it's still up in the air whether he will appear in the audience of the second debate. As Trump's campaign continues to struggle after the Washington Post released a 2005 video recording showing him making lewd comments about women, the Republican presidential candidate has hinted that he may target Hillary's husband in the second debate. If Trump were to do so, Bill may wish to remain out of sight so his reactions wouldn't be taken out of context.

According to CNN, Trump retweeted two tweets from Juanita Broaddrick, a woman who alleged in 1999 that Bill assaulted her in 1978. Furthermore, The New York Times notes that many are expecting Trump to become "even nastier" in tonight's debate, and he has compared his remarks in the 2005 clip to Bill's alleged infidelities. Considering Trump's previous threat to invite Gennifer Flowers to the first debate (he never actually did), it seems increasingly likely that he will go after Bill as a mark against Hillary's character.

Aside from hitting the road to campaign for his wife recently, Bill has stayed largely out of the spotlight during Hillary's campaign. Recently, her campaign manager reminded everyone that the debate is between Trump and Hillary, despite the Republican candidate's shift in focus.

"If we need to discuss the issues that were raised in that video with Donald Trump that’s fine, but the question here is what is Hillary Clinton’s take on that issue, not her husband," he said, according to CBS News. So it remains to be seen whether Bill will be in the audience for tonight's debate, but he may choose to sit this one out for fear of taking attention away from Hillary.

The debate will be moderated by CNN's Anderson Cooper and ABC's Martha Raddatz. You can catch it on major news channels or stream it online.