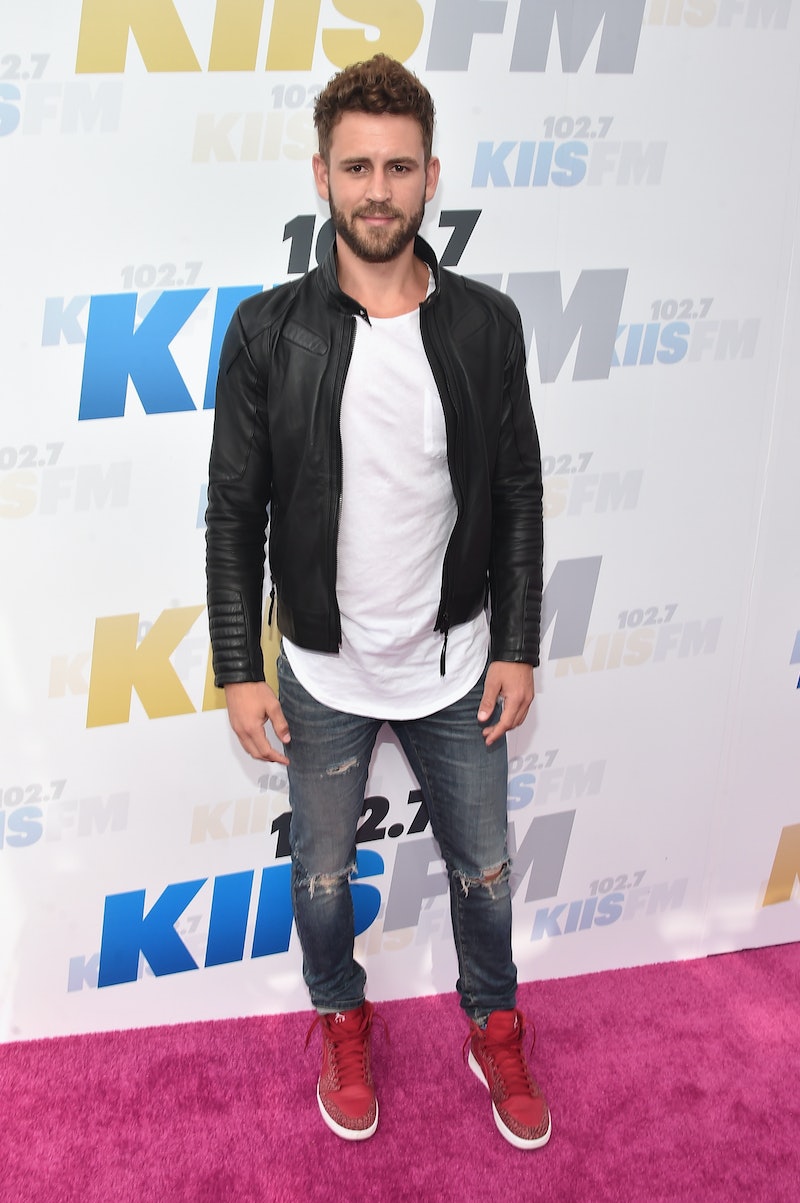 Nick Viall is currently shooting his Bachelor season and spoilers are heating up already. That's right — his season hasn't even aired, and yet information has been revealed all throughout filming. Most recently, TMZ posted a video that drops some deep-in-the-season spoilers, and, if you don't want to know what's gonna happen, you should probably stop reading right now. The latest of the Nick Viall Bachelor spoilers is that he appears to go on a date in his hometown in Waukesha, Wisconsin, with a brunette, according to the aforementioned video posted by TMZ on Sunday.

Here's what I can gather from the footage: Nick has his arm around a brunette woman while crossing the street. They are holding hands and their fingers are intertwined. Nick seems to smile. Together, they cross another street and Nick can be seen talking and hand gesturing. The unnamed woman seems to be laughing. On-lookers can be heard saying, "That's The Bachelor, oh my God."

But this isn't the first time The Bachelor franchise has ventured into Waukesha — remember that Nick took Andi Dorfman out and about in his hometown on The Bachelorette, buying cheese curds and meeting his family. TMZ reports that in Nick's most recent visit back, Nick and the mystery woman headed to the Rochester Deli for sandwiches, and according to the Waukesha Public Library, Nick was also in town filming about a month ago at a local cafe called The Steaming Cup.

Seems like a hometown date to me. But just in case you're a bit skeptical, I can tell you that the TMZ video footage matches up with Bachelor exec producer Mike Fleiss' recently tweeted behind-the-scenes teaser photos, which have featured baby cows, Nick posing on a what might be a farm, and what looks like Nick coaching girls' soccer.

Whoever Nick's dates are during this hometown visit, it already looks like it's totally possible that the two-time Bachelorette runner-up could really find lasting love this time around.

More like this
Gabby & Rachel Reveal How That 'Bachelorette' Rose Ceremony Twist Happened
By Grace Wehniainen
Former 'Bachelor' Producer Elan Gale Knows The Secret To Your Favorite Shows
By Samantha Rollins
Everything To Know About 'Bachelor' Host Jesse Palmer
By Justice Namaste and Radhika Menon
It’s Official: The Bachelorette Is No Longer A Fairy Tale
By Samantha Allen
Get Even More From Bustle — Sign Up For The Newsletter