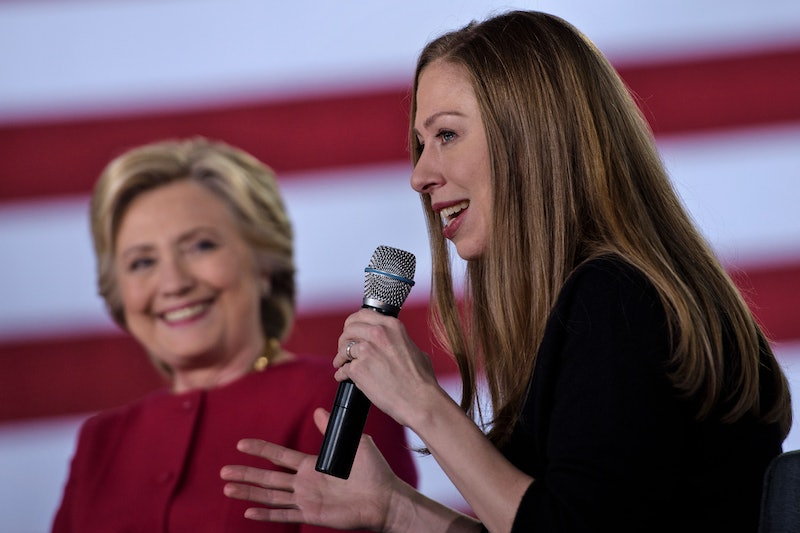 After a week of crazy revelations in Donald Trump's campaign of horrible comments the candidate made about women on tape back in 2005, Hillary Clinton is readying to face her opponent in the second debate. But Clinton faced her own set of troubles this week as leaked emails containing transcripts of her speaking to Wall Street executives called into question the extent of her loyalty to big banks. With all of this happening, you might be wondering" is Chelsea Clinton at the second debate to support her mom?

According to People, both Chelsea and Bill will attend the debate at Washington University in St. Louis on Sunday at 9 p.m. EST. This will be Chelsea's second time attending a presidential debate to support her mother as the Democratic Party nominee, as she also was present at the first one on Sept. 26. The second presidential debate town hall format is a departure from the first, as the candidates will respond to questions not only from the two moderators, CNN anchor Anderson Cooper and ABC News' global correspondent Martha Raddatz, but also by undecided voters. ABC reports that Gallup will select the audience members to pose questions to the candidates during the debate.

Leading up to the debate, Trump held an impromptu press conference with several women who have accused Bill of sexual misconduct.

"We’re not surprised to see Donald Trump continue his destructive race to the bottom," Hillary Clinton For America communications director Jennifer Palmieri told Bustle in a statement. "Hillary Clinton understands the opportunity in this town hall is to talk to voters on stage and in the audience about the issues that matter to them, and this stunt doesn’t change that. If Donald Trump doesn’t see that, that’s his loss. As always, she’s prepared to handle whatever Donald Trump throws her way."

In the past, Trump has threatened to bring up the allegations against Bill, and Chelsea responded to the threat as Trump just trying to distract from the real issues. Chelsea told Cosmopolitan:

My reaction to that is just what my reaction has been kind of every time Trump has gone after my mom or my family, which is that it's a distraction from his inability to talk about what's actually at stake in this election and to offer concrete, comprehensive proposals about the economy, or our public school system, or debt-free college, or keeping our country safe and Americans safe here at home and around the world.

We'll have to see whether Trump's attempts to deflect his own past comments about women with the accusations against Bill will work for him. Given various members of the Republican Party's distancing themselves from Trump in the last few days, it's hard to say if anything will help him regain favor within the party.

Despite Trump's tactics, it's encouraging to see Chelsea and Bill stand with Hillary throughout her historic campaign.