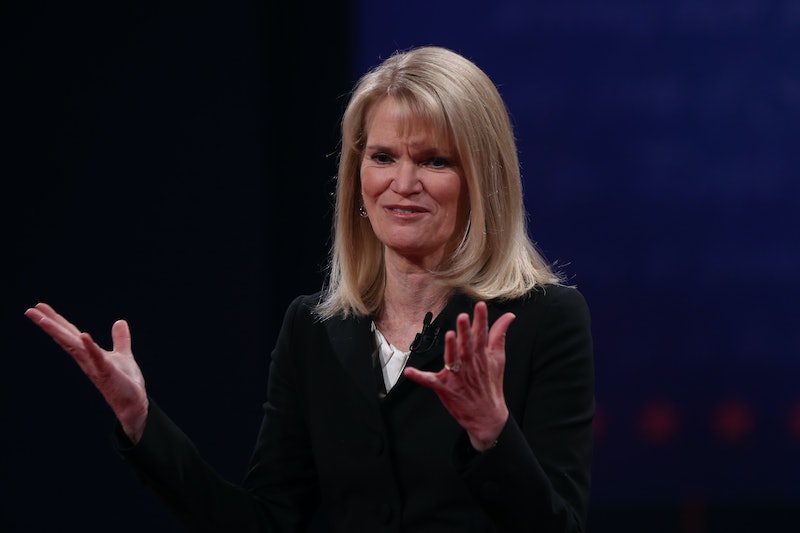 It has been a crazy few weeks since the last presidential debate, so much so that Sunday night's meeting between the two nominees has likely been just as widely anticipated as their first encounter. The Oct. 9 debate kicks off in St. Louis, Missouri at Washington University in the midst of a disturbing and controversial scandal involving Republican nominee Donald Trump, which will play a significant role in the election moving forward. Given the timing, there is likely more pressure on Sunday night's debate moderator, Martha Raddatz, whose political affiliation actually doesn't matter at all because she is going to take names regardless.

Raddatz' political affiliation is also not public information, which in some ways might make her appear as a more balanced reporter. A seasoned war reporter and the chief global affairs correspondent for ABC News, Raddatz brings to Sunday's debate a deep knowledge of the military and foreign policy. With that, she is expected to bring a critical eye to the second presidential debate and will likely ask the hard questions of both the candidates.

According to the Washington Post, Raddatz' first question during the 2012 vice presidential debate, which she moderated, was one about Benghazi, which she directed at Vice President Joe Biden because Raddatz is going to ask important and tough questions no matter her political affiliation. She asked Biden, "I would like to begin with Libya ... It was a pre-planned assault by heavily armed men. Wasn't this a massive intelligence failure, Vice President Biden?"

Raddatz is tough. According to Cosmopolitan, she will absolutely challenge both candidates during Sunday's debate and she will pose follow up questions because answers are important and the future of this country — especially at this time in — depends on clear answers.

Even though she has not disclosed any political affiliations to the public, conservatives have reportedly pointed the finger at her for being "easy" on liberals, according to Heavy. This is apparently because Raddatz once described Clinton as "combative, charming, disarming and clearly ready for a fight."

Sunday's other debate moderator, Anderson Cooper, has also never disclosed his political affiliation and reportedly does not vote in order to assure that his election coverage is fair, according to Heavy.

Sunday's debate is sure to get interesting and heated and I look forward to watching Raddatz and Cooper kick some butt together in St. Louis while asking tough questions and holding their respondents accountable.