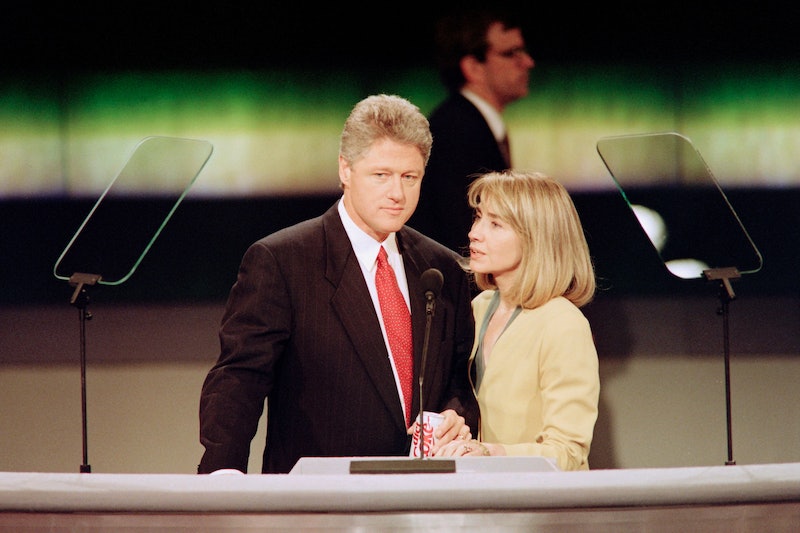 In the run-up to the second of three schedule presidential debates, Republican nominee Donald Trump staged a surprise press conference, bringing together four women who've made severe allegations against former President Bill Clinton and Democratic nominee Hillary Clinton: Juanita Broaddrick, Kathleen Willey, Paula Jones, and Kathy Shelton. Unlike the first three, however, Shelton's criticism of the Clintons has nothing to do with Bill's sexual conduct ― if you're unsure who she is and why she was in attendance, then you need to know what happened in the Kathy Shelton rape case.

It's not the first time Shelton has gone public with her story, and her criticisms of the former Secretary of State. Now 54, Shelton was the victim of an alleged rape in 1975, when she was just 12 years old. The man accused of the crime was a 41-year-old man named Thomas Alfred Taylor, and his appointed defense attorney was a young Clinton, who successfully struck a plea deal to reduce Taylor's charge, from one of rape to unlawful fondling of a minor.

That, in broad strokes, is the kernel of the controversy surrounding Clinton's treatment of Shelton ― that she defended Shelton's accused rapist, despite her claims of being a champion for the rights of women and girls. Shelton herself argued this case earlier this year, speaking to the Daily Mail.

I don't think [Clinton's] for women or girls. I think she's lying, I think she said anything she can to get in the campaign and win. If she was [an advocate for women and children], she wouldn't have done that to me at 12 years old.

The tweet above from Shelton summarizes her claims about Clinton. Namely, that Clinton defended her alleged rapist, secured him a favorable outcome, and years later laughed about it. The latter part is not supported by the factual record ― audio of the conversation in question does seem to show Clinton laughing about the lack of reliability of polygraph tests, but not at Shelton herself.

Also, as Snopes.com notes, some anti-Clinton memes have asserted that Taylor went free by virtue of Clinton's defense. This is untrue ― he was ultimately sentenced to five years in prison, though the judge in the case heavily reduced the sentence to less than a year.

But more to the point, whatever you might think of the sad state of affairs that victims of sexual assault often face within the American judicial system, as Taylor's appointed defense attorney, it's the very definition of her job to offer a vigorous, full-throated defense. It's simply a necessity, thanks to the constitutional rights of the accused.