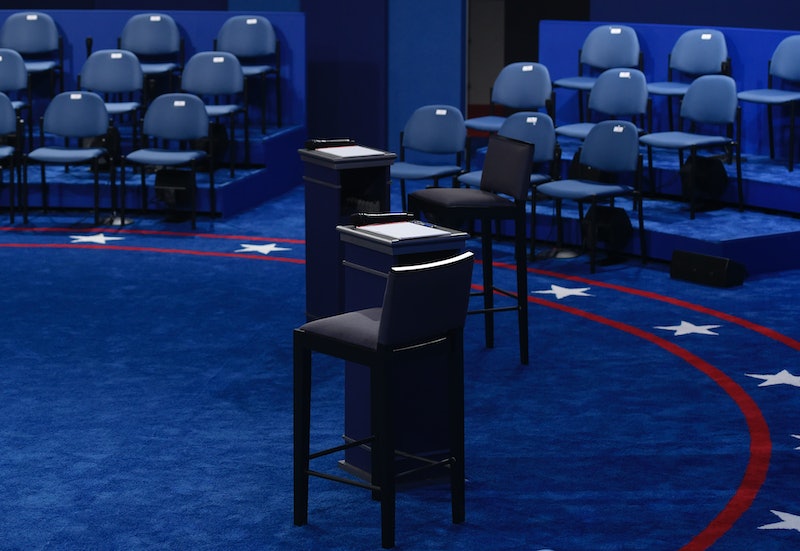 The second debate between Hillary Clinton and Donald Trump may well have been one of the most highly-anticipated debates in presidential history, and it's finally over. It would have been a high-stakes forum no matter what, but it was made exponentially more so due to the publication of Trump's now-infamous "grab them by the p*ssy" comments in The Washington Post. Clinton most definitely had the upper hand as the night began — but who won the second presidential debate?

Clinton won — not that this was much of a surprise. It quickly became clear at the first debate that Clinton is a much better debater than Trump, and she successfully baited him time and again throughout the forum. Since then, Trump has had an unending string of terrible news cycles, beginning with his unprovoked attacks on beauty pageant winner Alicia Machado and ending with the leak of a tape, recorded in 2005, of Trump boasting to Billy Bush his ability to commit sexual assault with impunity because he's "a star."

Trump had his back against the wall before the debate even began, and betting markets pegged Clinton as the heavy favorite to win as the two candidates took the stage. And win it she did.

To be fair, Trump didn't implode spectacularly this time as he did during the first debate. He appeared less rattled, and his attacks on Clinton were somewhat more coherent than the word salad he treated us to last time. But make no mistake: Trump stepped in it several times throughout this debate, saying more than a few things that will make their way into Clinton campaign ads over the next couple of weeks, and he didn't reverse the downward spiral his campaign was in before the debate began. At best, he turned in a performance that would have been excellent if this were a Republican primary debate. But it wasn't.

Trump was asked about several things he's said or did that are positively toxic to a general election audience: His 2005 remarks to Billy Bush, his tweets about Machado, his proposal to ban Muslims from entering the United States, and his attacks on Khizr Khan's family. He didn't have a satisfactory answer to any of them. Sometimes, as with the Muslim ban, he didn't address the question. Other times, he tried to change the subject; this was his strategy when asked multiple times about his 2005 remarks. When asked about Machado, he simply denied saying what he had said.

But his response to the Khan question was perhaps the worst of them all, and by itself would make this a losing debate for Trump.

Trump, you will recall, criticized the family of Humayun Khan, a U.S. soldier who died in Iraq in 2004, shortly after the Democratic convention in August. He never apologized for this, and it became a lingering issue for the campaign. When asked about this at the debate, here's what Trump said.

"Captain Khan is an American hero. And if I were president at this time, he would be alive today," Trump said, "because unlike [Clinton], who voted for the war without knowing what she was doing, I would not have had our people in Iraq."

Trump did in fact support the war in Iraq, but never mind that: His claims that he himself could have saved Khan's life was incredibly condescending to his family. A lot of people were appalled when Trump decided to criticize Khan's parents for speaking out against his candidacy, and now, the arc of this story is complete.

Rather than apologize for insulting the parents of a child who died serving in Iraq, Trump has made clear that he doesn't owe them an apology, and in fact, that they should put him in the White House, because he could have saved their child's life. That's unbelievably rude, and it's based on a lie — Trump didn't oppose the war in Iraq. If Trump's initial knocks on the Khan's outraged the general electorate — and polling suggest that it did — this will almost certainly make matters worse.

The Khan exchange was a microcosm of why Trump did not improve his standing after the debate. He allowed the most damning accusations against him to go unanswered, and in some cases, made them worse.

We should all retain a sense of perspective, however. With the exception of a few days in late July, Trump has been the underdog for this entire race, and his campaign was in deep, deep trouble prior to both the debate and the publication of his misogynistic comments on Friday. His disastrous performance at the first debate appears to have hurt him severely, and significant contingents of his own party began abandoning him after the publication of the 2005 audio. Going into the second debate, FiveThirtyEight's polls-only model gave him just an 18 percent chance of winning the presidency.

In other words, it's quite possible that this debate — while fascinating to watch on multiple levels — may not have had the capacity to change the state of this race. I'm not sure what a good debate performance for Trump would have looked like, but I'm equally unsure that it would have done anything to improve his chances of becoming president.

That said, Trump didn't turn in a good debate performance, because Trump didn't address or neutralize any of the issues that he would have needled to in order to reverse the tailspin his campaign is in. As such, he didn't win the debate, and he didn't improve his chances of becoming president. Clinton did win the debate, and barring anything extraordinary, she'll win the presidency in November as well.