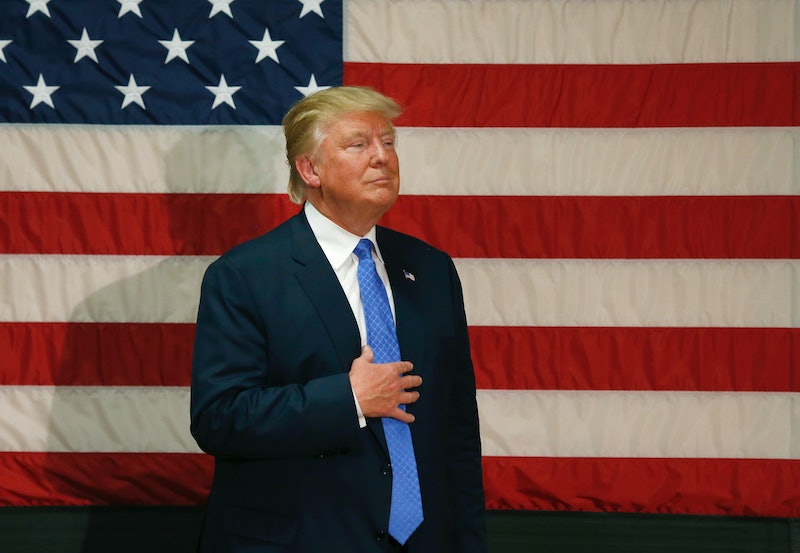 Prior to the second presidential debate on Sunday night, Republican nominee Donald Trump broadcast a Facebook Live press conference with three women who had previously accused former president Bill Clinton of sexual assault or impropriety. It was an obvious attempt to deflect from an absolute hailstorm of bad press and GOP defection that threatens to annihilate his candidacy after leaked tapes revealed him grossly boasting about touching women without their consent. But Trump hasn't historically been a champion of Bill Cinton's accusers — quite the opposite. He has been a harsh critic of them and a vocal fan of Bill Clinton's.

In a 2008 interview with CNN, Trump called the Lewinsky scandal "totally unimportant" and said that it was "nonsense" that the former president had faced impeachment. When asked about Clinton's alleged victims in a 1998 Fox News interview with Neil Cavuto, Trump said that Clinton was a victim himself. “I don't necessarily agree with his victims, his victims are terrible. He is really a victim himself. But he put himself in that position.”

If Trump believes that the charges levied against Clinton are true, as he certainly purported to on Sunday night, to then call Clinton a victim himself is to perpetuate a dangerous trope of rape culture that demonizes survivors and forgives perpetrators. And forgive he does — in the interview, Trump goes on to say of Clinton "I think he's terrific. I think the guy's terrific."

Trump was historically a fan and sometime-friend of Clinton before it was politically expedient for him to drag the former president through the mud, just like he was critic of Clinton's accusers before he had to use them as human shields against criticisms of his own misogyny.

In a 1998 CNBC interview, Trump called Clinton accuser Paula Jones a "loser," and in the 1998 Cavuto interview, Trump went on to say that “The whole group, Paula Jones, Lewinsky, it's just a really unattractive group. I'm not just talking about physical."

Cavuto then asks if it would be any better if it were a "supermodel crowd," and Trump says "at least it would be more pleasant to watch" — as though Clinton's accusers were members of a beauty pageant or a jello wrestling match, rather than women who claim to have been assaulted and mistreated, and who deserve to have their allegations taken seriously.

Trump's stunt on Sunday night was yet another example of the candidate using women as objects to further his own advancement or satisfaction, be it political or sexual. But a lifetime of revolting commentary on women — commentary that paints us as playthings to be rated on our appearances, treated "like shit," kept in the kitchen, and cast aside the moment a newer model comes along, rather than as human beings — speaks louder than a brief Facebook Live video, it speaks louder than a bumbling yearlong campaign, and it speaks louder than Trump's positively laughable claim at Sunday's debate that "no one has more respect for women than I do."

Trump has so little respect for women that not even their pain is sacred — it is just another thing for him to exploit for his own gain.