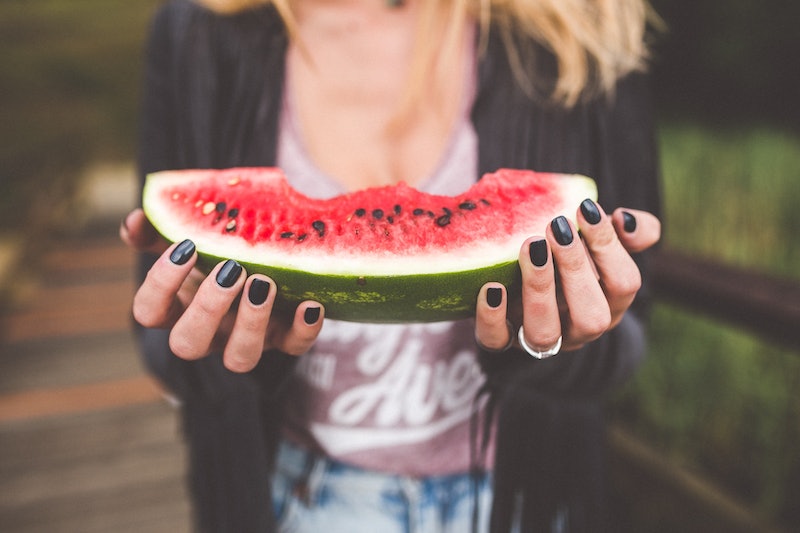 When we feel hungry, most of the time, we just assume we need food. However, hunger pangs don't always mean you're in need of a meal, and there are a number of other things your hunger could be trying tell you. If you're hungry very frequently or at off times, it may be an indication that something is off with your diet or your health, and becoming in tune with your body's signals can help you figure out how to be your healthiest.

"Before you jump to the conclusion that you’re hungry and need to eat ASAP, think about a few things," says Abby Sauer, MHR, RD, a nutrition scientist for Abbott, over email. "When was the last time you ate? What are your surroundings? Who are you with? How are your other health habits, like drinking water or sleeping at least eight hours a night, fairing? There are many factors and stimuli that can go into making you feel like you’re hungry, when in reality you may be simply reacting to your surroundings or previous behaviors."

Sometimes when you're hungry, you're really just hungry, but other times, something else is going on. Here are 11 possible things your hunger may be trying to tell you.

"If you’re not sleeping enough, your hormones can go haywire," says Sauer. "Ghrelin, a hormone that triggers appetite, and leptin, a hormone that helps you feel full, are two of the main culprits. When these hormones fluctuate, they can make you feel hungry. Combat that by getting enough sleep each night."

If you’re mildly dehydrated, your body can confuse that with hunger. "The hypothalamus, the part of your brain that regulates appetite and thirst, can get confused when you haven’t had enough water and trick you into thinking you need food instead," says Sauer. "You can remedy this by drinking a glass of water and then waiting 20 minutes to see if the hunger subsides."

3. You're Experiencing A Caffeine Crash

Do you start your day with a large cup of coffee? "Caffeinated beverages can suppress appetite in the short-term for some, resulting in a cascade of hunger feelings later," says Debra Boutin, MS, RDN, CD over email. "Eat breakfast in addition to your morning coffee to keep your systems balanced."

4. You're Eating Too Many Processed Foods

"Processed foods increase your blood sugar levels and then cause them to crash later on, making you feel hungrier than before," says Sauer. "These refined sugars have a big impact on your brain’s reward center, which is why they are so difficult to avoid. Substituting refined foods for whole grain options can help satisfy your hunger without making you feel ravenous only an hour or so later."

One study from the Journal of the American College of Nutrition found that inadequate nutrient intake can play a role in our hunger hormones. Vitamin A is linked to regulation of fat cells and the hormones they release, and vitamin D may play a role in the release of leptin, the hormone that controls our sense hunger and how much fat is stored in the body, according to the study.

We've all been in a situation where we didn't know what to do, so we ordered pizza or one our favorite foods, even if we aren't actually hungry. When we are bored, we want to stimulate our dopamine receptors, and food can seem like an attractive way to do this, according to Psychology Today. Instead, find another way to reward your brain, such as doing a fun activity.

"When I'm lonely or have returned from a bad date, I always crave food," says Devin Alexander, nutrition adviser and chef on NBC's Biggest Loser, over email. "But I know I'm not hungry because when I have a great date I crawl into bed with a smile on my face without even thinking about food." Food can have a calming and soothing effect, so it's not uncommon to turn to it when we are emotional. Instead, look for other ways to comfort yourself when you find that you're emotional.

"If you find yourself thinking your hungry when you know you've eaten enough, consider whether you might be undergoing stress," says Alexander. Like sleep, stress can have an influence on your hunger hormones, making you crave food when you're not really hungry, according to Everyday Health.

"I find myself standing in front of my refrigerator often when I'm procrastinating," says Alexander. "I equate it to the ocean tow: I sometimes will end up there and wonder what even made me leave my desk." Instead of turning to food as a distraction, choose something healthy like some fruits or vegetables to help you power through what you need to do.

"If you’re still hungry after a meal, don’t assume you didn’t eat enough food — it’s possible you just ate too quickly," says Sauer. "Your stomach is probably full, but your brain may not have had time to catch up. Eating at a slow to moderate pace releases hormones in the brain that tell you you’re full."

11. You're Around Food All The Time

One study from the University of Birmingham found that the presence of other people can affect your food choices, and the unhealthy choices of others can actually undermine your healthier choices. "If you’re around other people who are eating, especially something that is sugary, the combination of their influence and your food senses tingling could be enough to tell your brain 'You’re hungry!'"

As long as you're making healthy choices, there's nothing wrong with eating when you're hungry, but if you're feeling famished all the time, you might want to consider these potential signals.