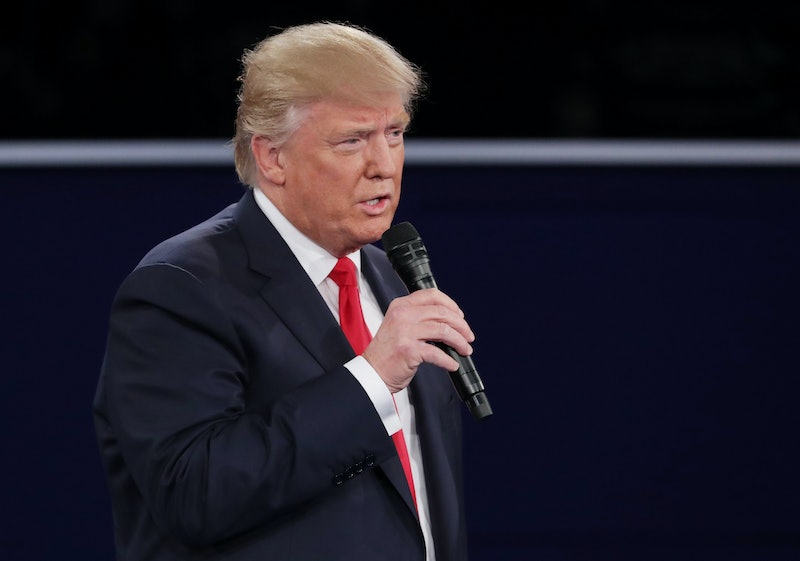 No one expected otherwise, but it only took a few minutes into Sunday night's second presidential debate for the recently-released tapes of Republican candidate Donald Trump bragging about sexual assault to be brought up by the moderators. When asked about the tapes — specifically, whether he had ever groped or kissed a woman without her consent — Trump defended his lewd comments, calling them nothing more than everyday "locker room talk." Yet the most disturbing part of Trump's speech came midway through, when he stopped talking about his horrifying comments and pivoted to ISIS, saying that sexual assault wasn't a real issue actually worth discussing or caring about during the debate whatsoever.

"And we can get onto much more important things and much bigger things," Trump said, as he attempted to veer away from his comments in the tapes and into a rambling discussion of ISIS and violent threats. This comment is not only frustrating to hear, it's also innately wrong. Of course, ISIS and terrorism are major issues that deserve to be discussed. But sexual violence is also a hugely important subject, and to diminish its significance is incredibly problematic. According to RAINN, an American is sexually assaulted every two minutes, and one out of every six American women has suffered an attempted or completed rape in her lifetime. For a presidential candidate to dismiss the severity of this issue is troublesome, yet sadly not unexpected from Trump considering his dismal history with women's rights and the comments heard on the Access Hollywood tapes.

Sexual assault survivors already have to fight for their rights and to get the support they need; to hear that one of the candidates for president doesn't even believe that their struggles are important is heartbreaking, and a call to action. We need to elect a candidate who treats sexual violence seriously and gives it — and the people who experience it — real respect, not shrug it off, make jokes about it, or imply that it's not worth even talking about when compared to the other "real" issues facing our country.

More like this
'The Capture' Is Finally Back – & S2 Looks Tense AF
By Sophie McEvoy and El Hunt
The Lionesses Are Calling For Equal Access To Football In Schools
By Sophie McEvoy
Your Daily Horoscope For August 18, 2022
By Alexandria Lettman
Here’s When 'She-Hulk' Takes Place In The MCU
By Brad Witter
Get Even More From Bustle — Sign Up For The Newsletter