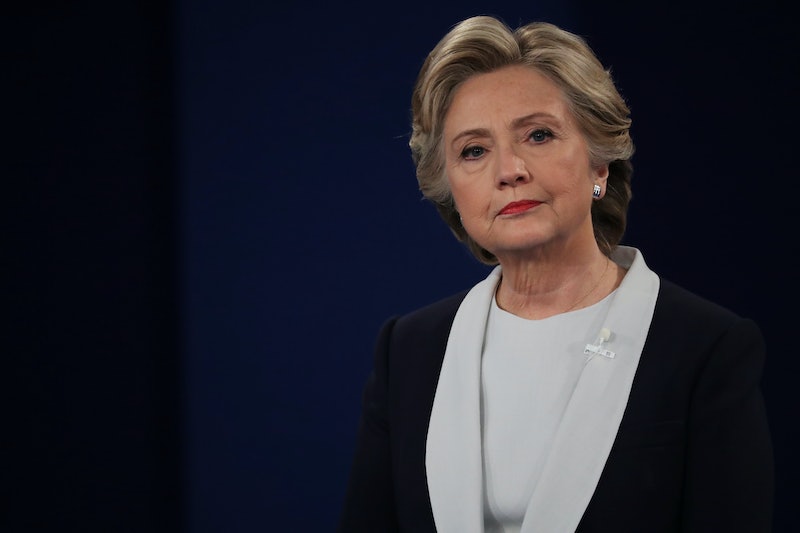 The infamous 2005 hot-mic tape where Donald Trump brags about grabbing women by their genitals and kissing them without consent has led to a campaign implosion. Republican politicians are leaving Trump's side in droves and calls for him to drop out of the race have abounded. It was entirely unsurprising, then, that the first few questions on Sunday night's presidential debate focused on the Trump tape. Town hall contributors asked questions about model behavior for America's youth, and moderators Martha Raddatz and Anderson Cooper explicitly questioned Trump about his references to sexual assault. As Trump began to defend himself, Hillary Clinton's face said it all.

"Nobody respects women more than me," said the man who told Billy Bush that he could "grab [women] by the pussy" because women, according to Trump, let celebrities "do anything." He repeatedly attempted to change the subject — Obamacare, ISIS, allegations of Bill Clinton's sexual assault--but after repeated insistence by Cooper that he answer the question directly, Trump ultimately declared that his comments were "locker room talk" and that his words were merely that.

But the former secretary of state's face made it all too clear that she was having none of the attempted justification. Her side-eye quickly went viral over Twitter.

Clinton's over it expression is definitely familiar to any woman who has ever been told that some vile comment about her body or another woman's is "just words." It's a familiar look to anyone who can understand how men who talk casually, even happily, or mischievously, about sexual assault can contribute to a culture that often fails to condemn assault when it occurs. It's also definitely familiar to the women Trump has personally harassed on Twitter and the women who have received hate mail and death threats from his legions of alt-right supporters.

When Trump chalks his comments up to "locker room talk," he normalizes sexual assault in a truly horrifying way. To dismiss his revolting comments as if they don't matter insults the American women who have experienced the sexual harassment and assault he casually laughs about. By claiming that all, or most, men talk that way, Trump also insults the millions of American men who don't.

Furthermore, not all of Trump's comments in that sickening tape can even be interpreted as "just words." He brags, for example, about making unwanted advances on a married woman who rejected him. He describes taking a Tic-Tac in case he decides to "just start kissing" the woman he is on his way to meet. But even if Trump's repellent comments about women are "just words," they can still do a hell of a lot of damage.