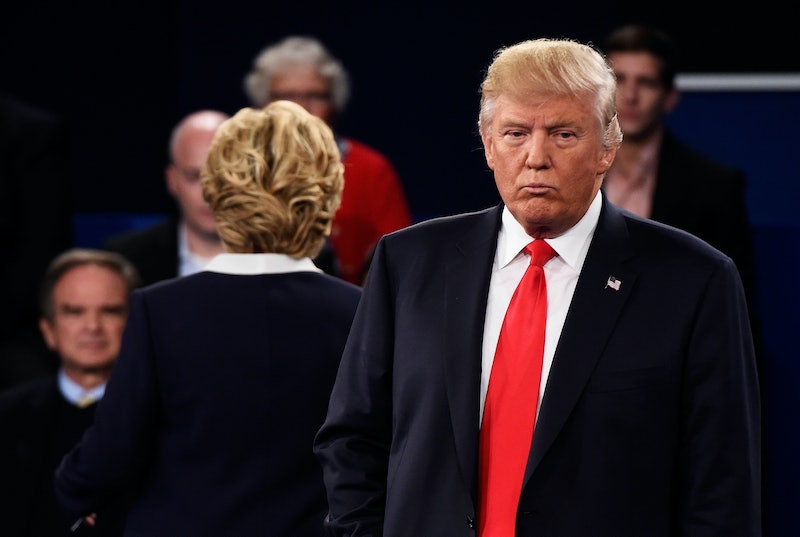 While speaking at the second presidential debate, Republican nominee Donald Trump appeared to defend lewd comments as "just words," angering almost everyone on Twitter. A video released by the Washington Post on Friday showed Trump — caught on a hot-mic — gloating that his celebrity status allowed him to "do anything" to women, including "grab 'em by the p*ssy," while filming a segment for Access Hollywood in 2005. While Trump's "it's just words" remark struck a nerve with many viewers on Twitter, it likely wasn't an attempt to defend his 2005 comments. Instead, he was probably attempting to counter Democratic nominee Hillary Clinton's pledge to serve America. Even so, ironically, Trump followed up his "it's just words" slam with a slew of vague promises.

Trump's 2005 comments have continued to be a major topic of conversation since they dropped Friday, so it wasn't surprising to see them get tossed into Sunday's 90-minute town hall style debate early on. "What we all saw and heard on Friday was Donald talking about women: what he thinks about women, what he does to women," Clinton said. "He has said that the video doesn't represent who he is. But I think it's clear to anyone who heard it that it represents exactly who he is ... But it's not only women and it’s not only this video that raises questions about his fitness to be our president."

Many on Twitter thought Trump was attempting to dismiss his lewd comments about disrespecting women by saying, "It's just words, folks. It's just words."

However, given how Trump then segued into alleging Clinton had failed New York when she served as senator, it's more than likely that Trump was responding to the tail end of Clinton's answer, in which she said the American values of respect, diversity, and collaboration were important to her and she would serve a diverse nation if elected.

But I can't let Trump off the hook just yet, because a few minutes later when moderator Martha Raddatz asked if Trump was now a different man than the Trump voters heard boasting about being able to freely kiss and grope women in 2005, he said: "That was locker room talk, as I told you. That was locker room talk. I'm not proud of it... If you look at Bill Clinton, far worse — mine are words, his was action."

So as much as I may want to believe that Trump isn't defending his boasting about being able to "grab 'em by the p*ssy" as "just words," I'm really not able to. Words — especially those used to degenerate and objectify women — mean something. They're never "just words."