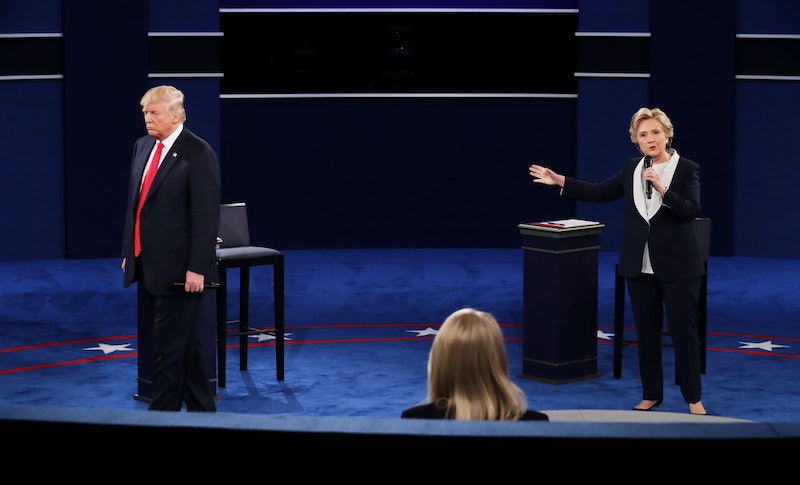 There is something to be said about the immense level of self-control and patience required to stand across the room from Donald Trump and listen as he attempts to divert attention from the many controversies plaguing his campaign to attack you. But even with her decades of experience in politics, the Democratic presidential could not suppress a little hint of her feelings. Hillary Clinton's eye rolls during the second presidential debate caught viewers' attention. However, considering how people were feeling about the debate — namely, frustrated — Clinton's muted, possibly involuntary facial reactions were the perfect counter to Trump's snappy indignation.

The embattled GOP nominee's tumultuous week, capped off by a damning video in which he bragged about groping women without their consent was sure to come up in the debate. There was little he could do but apologize for his vile comments, but in classic Trump-ian style, he also tried to divert attention to Bill Clinton's sexual history and implicate Clinton in the process.

"When Hillary brings up a point like that and talks about words that I said 11 years ago, I think it's disgraceful and I think she should be ashamed of herself, if you want to know the truth," Trump said, prompting an eye roll from Clinton that has become something of a fixture in these debates.

As Trump flailed, Clinton disregarded discussing her husband's past, instead using her opponent's answer to point out one of his greatest flaws. She said:

[Trump] never apologizes for anything to win.

And our children are watching. And he never apologized for the racist lie that president Obama was not born in the United States of America. He owes the president an apology. He owes our country an apology and he needs to take responsibility for his actions and words.

Clinton remained impressively calm throughout the debate as Trump's tone escalated. And while undecided voters considered who to cast their ballot for come November, perhaps on the issue of temperament, at least, it's clear who came away the clear winner.