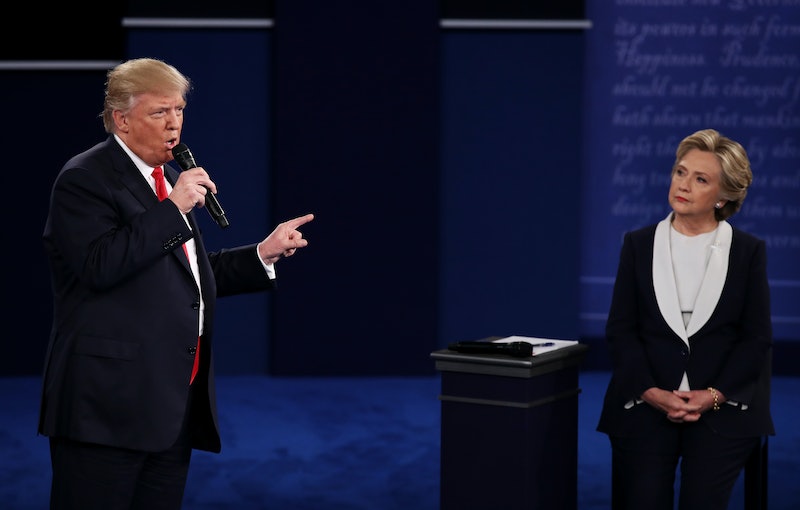 While skewering Hillary Clinton on her private emails during Sunday's presidential debate, Donald Trump called Clinton "the devil" to her face, unleashing all of the crazed Internet conspiracy theories that have been building up against the former secretary of state for years. The comment came in the middle of a classic tangential Trump tirade, in which the Republican presidential nominee accused Clinton of both breaking the law for using a private email server during her tenure as secretary state and personally conspiring with the Democratic National Committee to steal superdelegates away from Sen. Bernie Sanders. Indeed, it was quite the response — even for a brilliant wordsmith like Trump.

"Bernie Sanders, between superdelegates and [former DNC chair] Debbie Wasserman Schultz, never had a chance," Trump said, facing Clinton. "And I was so surprised to see him sign on with the devil."

What was Clinton's response to being called Satan on national television? She kept her cool, giving Trump an unbroken stare that could have frosted over hell in seconds.

It's not like Clinton hasn't heard this before. The former secretary of state has spent most of her public life fighting off accusations that she's cold, icy, conniving and shrill — you know, all the traits of a devilish woman who makes a home in the fifth circle of hell.

So, what was up with that "devil" comment, anyway? Well, Trump ignited the months-old conspiracy theory that the Clinton campaign worked with the DNC to sabotage the Sanders campaign over the last year. This theory arose in July, after WikiLeaks released nearly 20,000 internal emails between DNC officials revealing various anti-Sanders sentiments. Some of the released emails also showed how high-ranking DNC staffers floated possible tactics to use against the Vermont senator and his popular campaign.

Clinton and her campaign were not found in violation of any wrongdoing, nor is there evidence that Clinton or her staffers worked with the DNC to sabotage Sanders. That hasn't stopped right- and left-wing people on the Internet — or Trump — from speculating that Clinton was behind it.

Trump also spoke for the Internet's most prominent tinfoil hat conspiracists on Sunday when he continued to drill Clinton on the private email server she used during her tenure at the Department of State. Trump not only accused Clinton of being the devil incarnate, but also declared that he would further investigate her thousands of state department emails and send Clinton to prison. Yes, that will be Trump's first order of business when he enters the Oval Office in January.