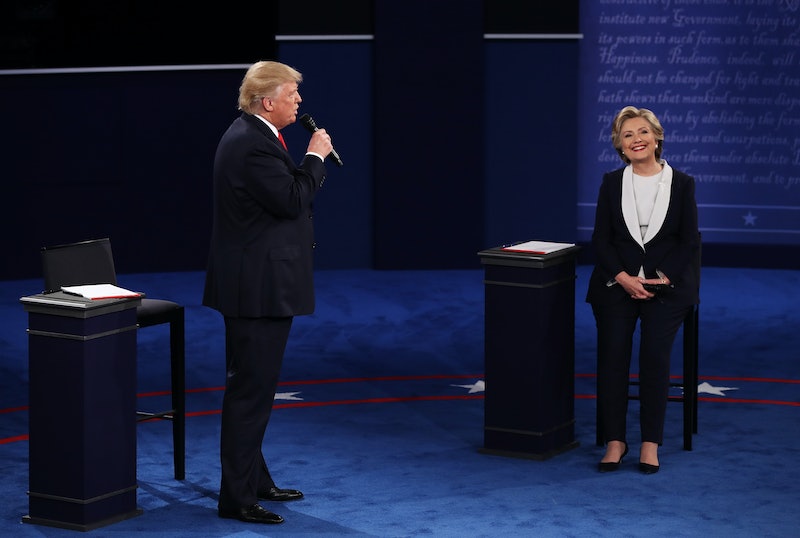 If American viewers found the first presidential debate to be tense, there may be no word available to describe the levels of friction and hostility present at the second showdown between the two candidates. From a debate start that lacked a handshake to a minute-long fiery exchange before the end of the event's first half hour, Hillary Clinton and Donald Trump showed even more cold shoulder than voters have become accustomed to over the duration of the campaign. And Donald Trump's "you'd be in jail" line proves that we have a despot running for president, once and for all.

The cutting reply made by Republican presidential candidate came in the midst of a statement by Clinton asserting that, with the kind of temperament Trump displays, it is "a good thing" Trump is not in charge of enforcing the country's laws as president. In contrast to Clinton's claim that it's the Republican candidate's attitude that would be bad for the country, Trump implied that Clinton fears a Trump presidency for another reason entirely, retorting "because you'd be in jail."

As you might imagine would be the case, there's a lot more to unpack from the one-liner, even for so brief a debate night exchange. Bringing the conversation to the subject of the private server containing Clinton's emails exchanged during her term as Secretary of State, Trump claimed that he will assign a special prosecutor to investigate Clinton's actions in relation to the server. And that's just a snippet of the mini debate implosion that led to Trump's declaration that he would put Clinton in prison.

While the moderators and candidates moved onto other topics, the promise by the Republican nominee to send his presidential opponent to jail was not one easily forgotten considering the weight of Trump's words and the close alignment of those words to the ideology of a leader with absolute power. Following the debate, MSNBC's Rachel Maddow pointed out that Trump's statement was one that normally "would be decried" or condemned in countries like the United States.

The Republican candidate may have been suggesting that Clinton would go to prison under a Trump White House only after the proper judicial process had been employed. Trump did not clarify the details of his pledge, however, and if the claim was meant to suggest Clinton would go regardless of the justice system's findings, the thought is one certainly not in line with the United States' democratic foundation.