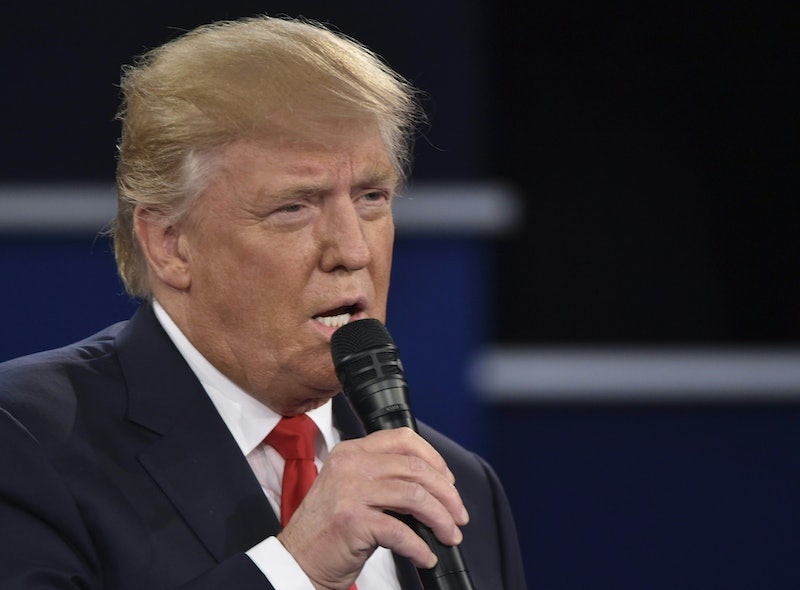 During the second presidential debate on Sunday, Donald Trump accused moderator Anderson Cooper of conspiring against him, claiming that Hillary Clinton is not being held accountable for her email scandal.

While responding to the assertion made by Clinton that he should apologize for offensive comments he's made in the past, Trump told Clinton that there are some things she needs to apologize for, namely her emails. He said that, should he be elected president, that he will have a special prosecutor look into Clinton's email scandal.

I think the one you should really be apologizing for and this thing you should be apologizing for are the 33,000 e-mails that you deleted and that you acid washed and then the two boxes of e-mails and other things last week taken from an office and are now missing. I'll tell you what I didn't think I'd say this and I'm going to say it and hate to say it: If I win, I'm going to instruct the attorney general to get a special prosecutor to look into your situation because there's never been so many lies, so much deception.

As the moderators tried to turn to another voter question, Trump made it clear that he wasn't done talking about Clinton's emails. He said to Cooper, "I'd like to know, Anderson, why aren't you bringing up the emails?" Cooper responded that they had been brought up. Trump said, "No, it hasn't. And it hasn't been finished at all." and when Cooper tried to allow the audience member to ask his question, Trump added, "It's nice, one on three."

Trump's "one on three" comment makes it clear that he really believes that everyone is conspiring against him. Although Clinton has been asked time and time again about her emails (including at an NBC town hall in September), it apparently isn't enough for Trump. He decided to blame Cooper and others of going after him for the things he's done and not pressing her on her past mistakes.

It's not the first time Trump has claimed that a debate has not been fair to him. The day after the first presidential debate, Trump claimed that moderator Lester Holt's questions were unfair.

Trump used the deflection tactic throughout Sunday's debate, as he did toward the beginning of the debate when he referred to his recently revealed comments as "locker room talk" and pivoting to talk about how important it is to defeat ISIS. At one point, according to a transcript by Vox, he said of the leaked tape, "Yes, I'm very embarrassed by it. I hate it. But it's locker room talk, and it's one of those things. I will knock the hell out of ISIS. We're going to defeat ISIS."

The response proves that Trump will do anything to deflect from what he should be held accountable for in order to attack Clinton.