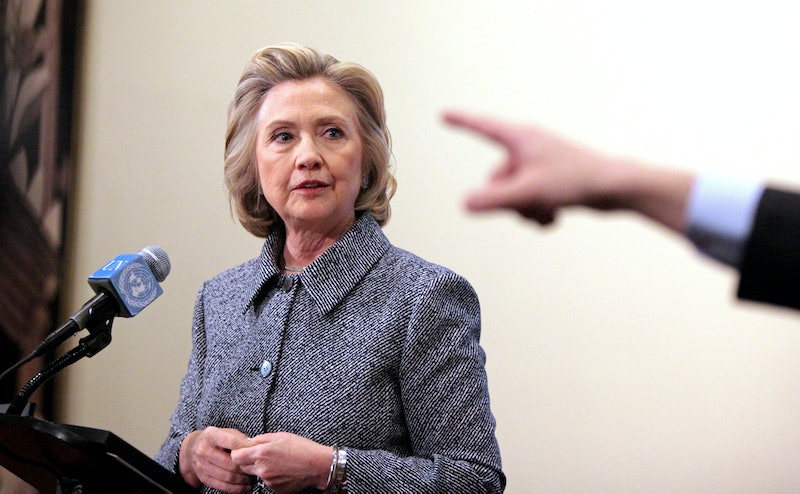 In the heat of the second presidential debate on Oct. 9, Donald Trump made a significant and scary threat against Hillary Clinton in regards to her email scandal. “If I win, I am going to instruct my attorney general to get a special prosecutor to look into your situation,” Trump said. “Because there has never been so many lies, so much deception, there has never been anything like it.” As president, Trump could help put Clinton in jail, but he couldn't do it quite as oppressively as he seemed to imply.

The president can't unilaterally force someone to go to jail — thanks to the fifth, sixth, and fourteenth Amendments, United States citizens are guaranteed the right to due process and a fair trial before they can be convicted of a crime and put in prison. However, the president does have the power to appoint a special prosecutor to investigate certain "covered persons" under the 1977 Ethics in Government Act. Those covered persons include the president, vice president, members of the cabinet, the Executive Office of the President, and high-level officials in DOJ, the CIA, IRS and the President's National election campaign. Since Clinton's alleged crimes were committed while she was the Secretary of State, she falls under that category.

Even if Trump can't follow through on his threat under the current legal system, he's shown over and over again that he doesn't have a good understanding or respect for the legal system as it currently stands. He's displayed despotic, demagogic characteristics on countless occasions, and there's no telling what he would say or do once in the Oval Office. As it currently stands, Trump could definitely start another investigation into Clinton's emails, and under his administration, he could give himself the power to singlehandedly punish her even further.