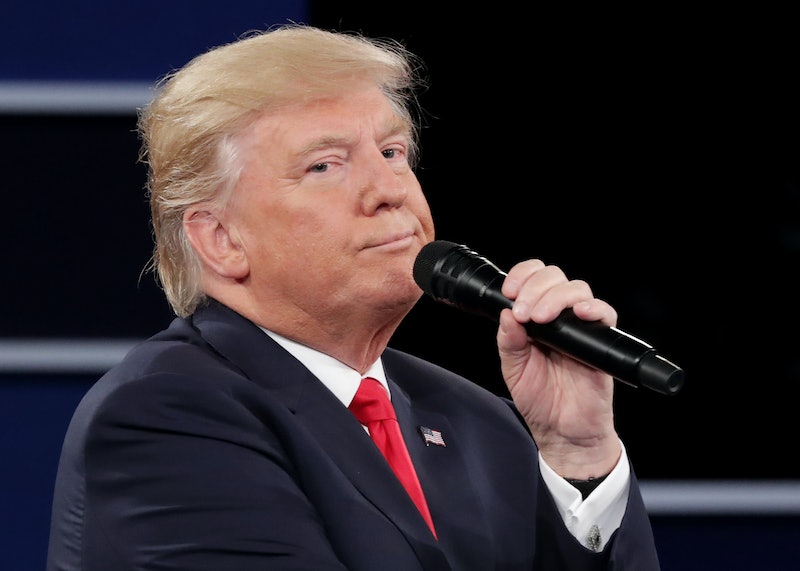 Donald Trump loves to talk about the Constitution and Declaration of Independence on the campaign trail, but there's no chance that he's actual read any of those documents. If he had, he obviously skipped over this very important word: consent. This tweet from Sunday night's presidential debate, which juxtaposes Trump with the word "consent" from the Declaration of Independence, perfectly sums up Trump's gross misunderstanding of sexual assault and harassment.

The words of the Declaration of Independence were prominently displayed during Sunday's presidential debate, the text superimposed in script on the stage's blue backdrop. At one point, Trump stood next to the word "consent." The image made for some tragically poetic composition.

Earlier in the evening, Trump tried to deflect questions regarding a recently leaked video that exposed the Republican candidate talking about how he allegedly kissed and groped women. Here's one choice quote from the now-infamous video, which The Washington Post initially published on Friday, October 7: "Grab them by the pussy. You can do anything."

When pressed by debate moderator Anderson Cooper, who accused Trump of "bragging about sexually assaulting women," the GOP nominee denied any wrongdoing. He called the comments "locker-room talk" and quickly pivoted to "the real issue" of the election: ISIS. Somehow, Trump thought that swift pivot let him off the hook.

This Photo Sums Up The Second Presidential Debate

"Just for the record, though, are you saying that what you said on that bus 11 years ago, that you did not actually kiss women without consent or grope women without consent?" Cooper asked Trump. After a few non-answers about how much he loves women, Trump responded, "No, I have not."

These allegations against Trump are disturbing, but what's arguably more worrisome is the candidate's reluctance to understand why his words incensed many American women. What Trump has failed to address since the video surfaced is consent — that these women he has touched or attempted to touch over the years did not consent to his sexual advances. That lack of consent takes this far beyond "locker room talk." Plain and simple, it's sexual assault and harassment.