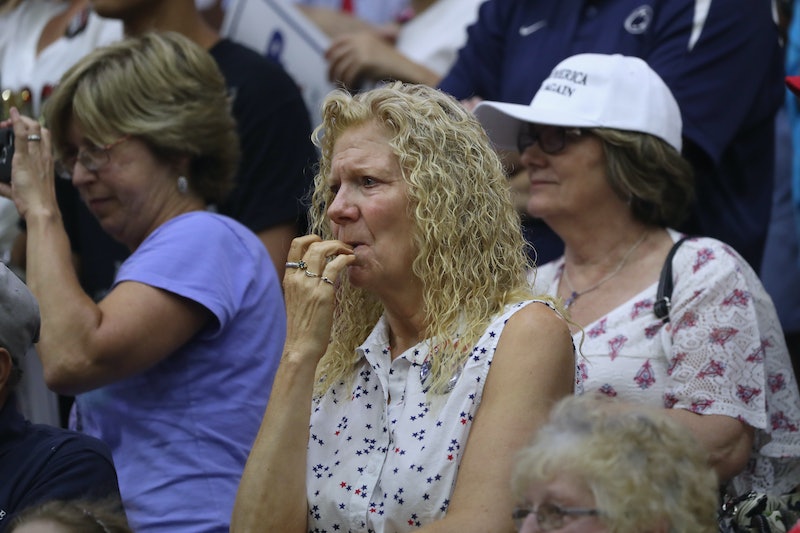 After the Washington Post leaked recordings of GOP nominee Donald Trump bragging about groping, grabbing, and kissing women — with or without consent – the real estate mogul was in for a night of tough questions at the second presidential debate on Oct. 9. Viewers were reportedly more interested in Trump's treatment of women than any policy issue. It was the discussion that dominated Twitter feeds on Sunday night.

Trump has hardly been a good option for women, despite his persistent statements about how much respect he has for women and how he is going to be "really good for women." The GOP nominee has proven to be quite the opposite — and pretty consistently, too. Sunday night's debate moderators did not give Trump a free pass on the matter.

Anderson Cooper bluntly asked Trump about the recording leaks almost immediately, and said, "You called what you said locker room banter. You described kissing women without consent grabbing the genitals. That is sexual assault. You brag that you have sexually assaulted women. Do you understand that?" Praise Cooper for asking the hard questions straight up and not backing down.

It only seemed normal, then, with such a disturbing record with women, that Trump's treatment of women would dominate Sunday night's online discussion.

Trump deflected. He always does when prompted to answer some of the most important questions. In response to Cooper's question, the former reality TV star said, "I don't think you understood what was said. This was locker room talk. I'm not proud of it." He then suggested that his so-called "locker room talk" was minor compared to abuses perpetrated by ISIS, a claim that paints the treatment of women and sexual assault victims and survivors as unimportant.

Trump can say, as many times as he wants to, how much he respects women, or how good he will be for women. In reality, Mr. Trump, you are not good for women if you brag about making unwanted advances toward women, and then suggest that sexual assault is no big deal. You do not respect women while you perpetuate the serious and violent rape culture that is so normalized in this world.

The fact of the matter is, you are not good for women as long as you don't take women's lives seriously.