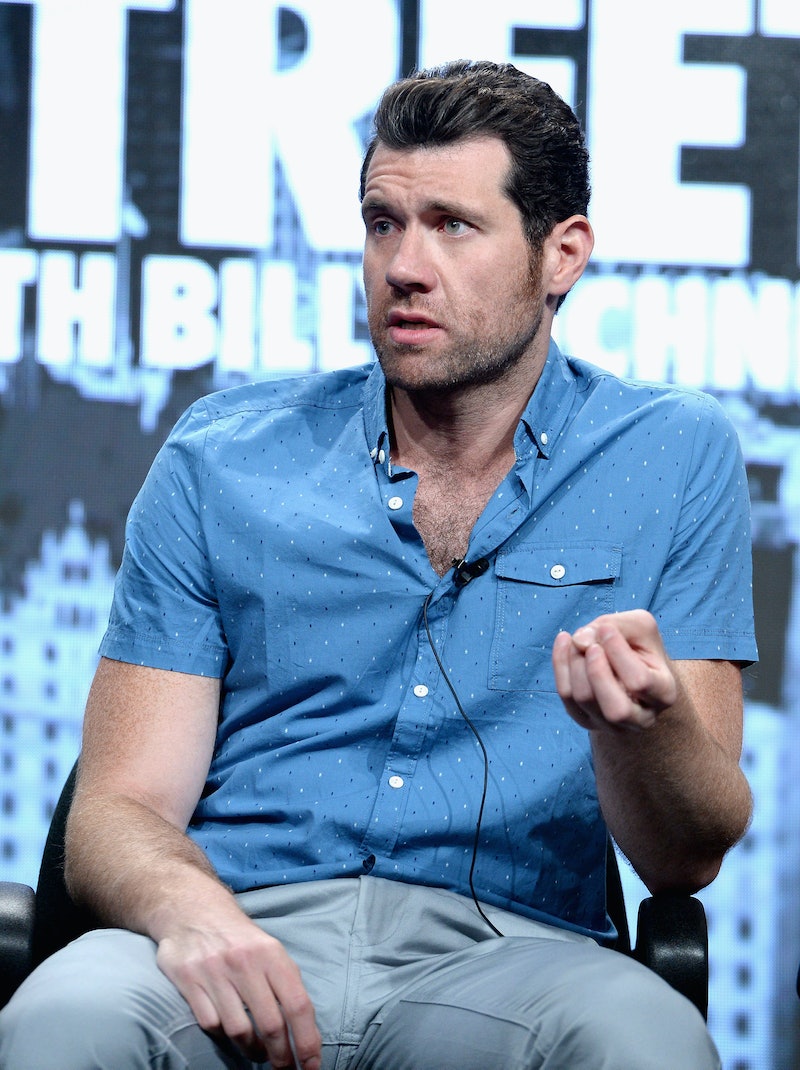 Plenty of people were tweeting during Sunday's presidential debate, including Billy Eichner, star of the comedy game show Billy on the Street. That evening, Eichner retweeted Democratic candidate Hillary Clinton a few times, including a retweet that proclaimed he was "proud to have Hillary's back tonight." On the other hand, Eichner had some harsher words for Donald Trump, Clinton's opponent. "Someone please explain to Donald Trump how the Senate works and how the government works and how vaginas work and also Russia," he tweeted.

Eichner is known for being a comedian, but in this case he uses his humor to make some important points about Trump's words. His tweet came on the heels of Trump admitting, "I know nothing about Russia," during the debate. "I know about Russia, but I don't know about the inner workings of Russia," Trump said, attempting to cover up for his mistake. He went on to suggest that President Obama's "weak leadership" was responsible for the alignment of Russia, Syria, and Iran. The statement is patently false, considering the countries were aligned before Obama took the presidential office. Maybe someone should look into fulfilling Eichner's request for someone to explain how Russia works to Trump.

In this vein, Trump consistently makes statements that do not hold up when fact-checked. When debate moderator Anderson Cooper questioned him about the 2005 tape released Friday which involved Trump making inappropriate comments about women, Trump played off his words and actions by saying there are worse things happening in the world.

"You called what you said 'locker room banter' — kissing women without consent, grabbing their genitals," Cooper said. "That is sexual assault. You bragged that you have sexually assaulted women."

Trump denied this, as he so often denies saying things there is clear evidence of him saying. "I'm automatically attracted to beautiful women — I just start kissing them, it's like a magnet," Trump said in the recording. "Just kiss. I don't even wait. And when you're a star, they let you do it. You can do anything. ... Grab 'em by the p*ssy."

No, Donald, your self-proclaimed "star" status does not permit you to "do anything" you want to women. Eichner had something to say about that as well, bringing up Trump's lack of understanding of how the necessity of consent works.

Trump's treatment of women and clear lack of understanding of world issues are just some of many reasons he's earned Eichner's scorn. The Republican candidate also made outrageous claims about Clinton's role in the government during the debate. If Trump really thinks Clinton could overrule everyone else in Congress, Eichner may be right that he needs lessons on the Senate and the government as well. And then, of course, there was that pesky sniffling.

As a comedian, Eichner made important points about Trump while keeping the tone light. He showed us that even humor has a way of reminding us about what is going on in the world. Hopefully he brings his political commentary to the next debate as well.