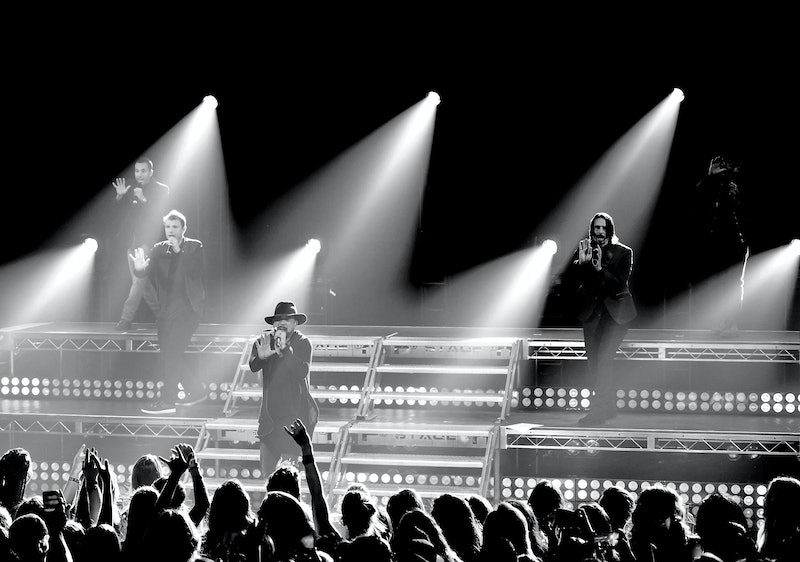 In many ways, this election season has felt like a repeat of the 1990s, what with a Clinton running for president and the sudden resurgence of Rudy Giuliani, among other things. Donald Trump pushed the nostalgia even further (although almost certainly unintentionally) during the Oct. 9 debate with a blast from the past lyric that fans of a certain boy band instantly recognized. Yes, Trump actually quoted the Backstreet Boys during the debate, and the Internet responded, as usual, with one of the best videos of this election so far.

The quote came during the segment of the debate focusing on Syria, and specifically on Hillary Clinton's plan to increase the number of refugees accepted from the war torn country from 10,000 last fiscal year to 65,000 next year. Trump, who has been very publicly opposed to accepting refugees and Muslims from abroad, was attacking Clinton's proposal when he inadvertently quoted the beloved boy band. "People are coming into our country, like we have no idea who they are, where they're from, what their feelings about our country is, and [Clinton] wants 550 percent more," Trump said, almost verbatim copying some of the lyrics from the Backstreet Boys' 1997 hit "As Long As You Love Me." The Backstreet Boys, however, had a much different message than Trump.

The lyrics are ever so slightly different from Trump's quote but the resemblance is remarkable. The song's lyrics read "I don't care who you are/ Where you're from/ What you did/ As long as you love me," which the incredible fan video was quick to point out. Obviously, it would be nearly impossible to prove that Trump ever listened to the song and had it in mind when he was making the statement on the debate stage, but it seems like compelling enough evidence to beg the question. I'm just saying, Ivanka would have been 16 in 1997, prime Backstreet Boys fangirl age — any devoted father would have definitely heard her singing it around the house or playing it on her Walkman. For that matter, he might still remember the lyrics almost two decades later. But perhaps the most tragic thing about the reference is that the Backstreet Boys had a much more open and accepting message than Trump ever had, and that was nearly 20 years ago.

People have pointed out these repeated coincidental parallels to the '90s throughout the campaign, prompting questions about whether or not it's an era to which the country really wants to return. Trump's now infamous campaign slogan "Make America Great Again" makes it sound like the country needs to go culturally backwards to find its greatness, when in reality American greatness should lie ahead. The '90s were fun and prosperous for lots of people, but it's important not to focus on how the past was, and instead look toward the future. This Backstreet Boys connection is funny and a nice stress release from that entirely too stressful debate, but everyone needs to make sure the focus is on 2016, not 1997.