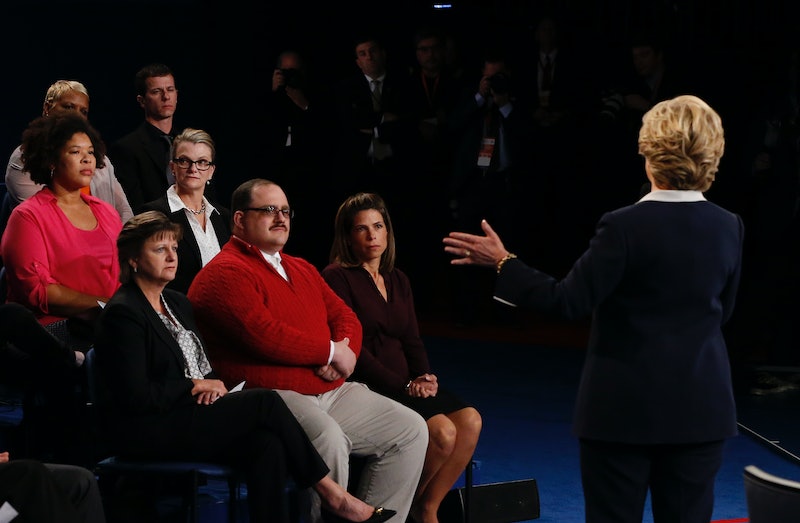 None of us expected that our lives would be forever changed in the dying moments of the second presidential debate, when the CNN moderators turned to an audience member to ask one of the final questions. Before he had even put down the microphone, we were all asking the same question: Who is Ken Bone, the unexpected star of the second presidential debate?

It happened just before the end of the event. Moderator Anderson Cooper turned the floor over to Ken Bone for a question about energy policy. Bone, who was sitting in the front row, stood up confidently to lay out his question to the candidates: "What steps will your energy policy take to meet our energy needs, while at the same time remaining environmentally friendly and minimizing job layoffs?"

The question certainly wasn't anything too unexpected (what is perhaps more surprising is that it was the only question that touched on the subject of energy policy, or indeed climate change, in the whole debate), and the candidates both handled it with ease. But I'm not talking about the candidates. I'm talking about the real man of the hour: Kenneth Bone, Uncommitted Voter.

Besides that title (which ran next to his name in the debate broadcast) and his interest in energy policy, the internet knows very little about the man who has since become legend. But oh, how we have surmised. I mean, look at that sweater of his. I'm not alone in loving that red sweater:

I feel like not enough attention has been paid to the fact that Bone actually had a white tie on under that sweater. It's not entirely obvious, but you can see it here:

So for those of you already preparing your Ken Bone Halloween costumes, you'd be doing yourself and Mr. Bone a disservice by forgetting that absolutely essential element.

The sincerity with which he asked. The patience with which he waited. The expectant look on his face as he hoped (I assume) to hear something from one of the two bitter combatants on stage that would convince him one way or another. Did they win you over, Ken Bone? The way you've won us over?

Somehow, I doubt it. Kenneth Bone has swept in like The Dress, Pizza Rat, and so many others, now to forever be an internet fixture. But he's managed to give us something that none of them ever could: hope for a country that could be seen to be falling apart at the seams. Now, however, the seams of Ken Bone's magnificent sweater can hold us all together.