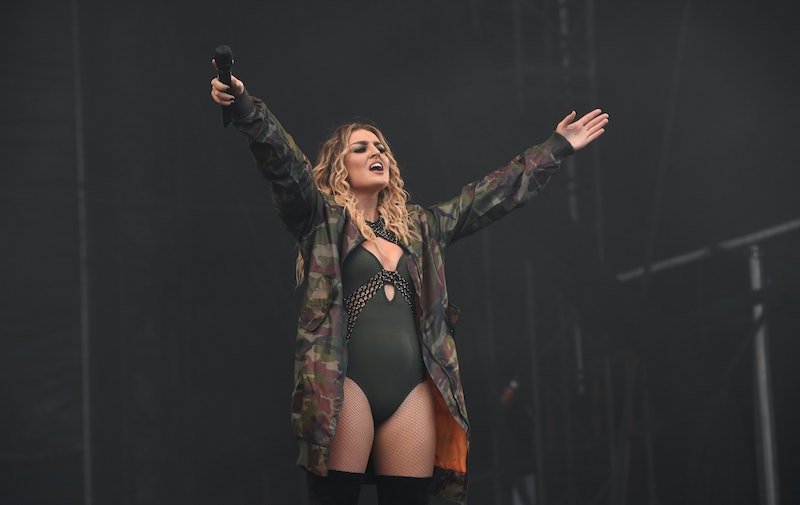 When Zayn Malik released Mind Of Mine, there was endless speculation about whether any of the songs on the album were about his ex-girlfriend, Perrie Edwards of Little Mix. In particular, Zayn's "iT's YoU" seemed to reference the brutal end of a relationship, and it's possible that Edwards was the inspiration for the song. But now it sounds as though Zayn's former fiancée could be about to tell her side of the story with new single, "Shout Out To My Ex." Is the new Little Mix song about Zayn Malik? At the very least, this rumor makes it seem like he might be an inspiration.

While we have to wait until Oct. 16 to hear the new single, some of the song's lyrics have allegedly leaked, and they are not pretty. If these are in fact the lyrics from "Shout Out To My Ex," then it certainly seems as though Zayn is getting some feedback from his ex-girlfriend, and it may not be the type of feedback he wants to hear. Featuring more than a little shade, the alleged lyrics to the new Little Mix song feature statements such as, "Heard he in love with some other chick, Yeah, yeah, that hurt me I'll admit." Since Zayn moved on fairly quickly with Gigi Hadid following his split from Edwards, it's not unreasonable to assume that the lyrics could be inspired by that real life situation.

Perhaps one of the most telling alleged lines in the new Little Mix song is the mention of tattoos. Zayn famously had Edwards tattooed on his arm, a portrait of her wearing her trademark beanie hat, which is most definitely the mark of a committed boyfriend. It feels as though the line "guess I should say thank you, For the 'hate you's and the tattoos" is aimed at Zayn and the declarations of love he made throughout their relationship. While the lyrics could easily be referring to someone else, getting someone's face tattooed on your body is a grand gesture, and it's possible that this is something Edwards remembers fondly about their relationship.

However, the fond memories are few and far between, according to the alleged leaked song lyrics. As "Shout Out To My Ex" reportedly continues, "I hope she gettin' better sex, hope she ain't fakin' it like I did," which ranks pretty high on the list of meanest insults you can deal your ex. Could Edwards be saying that her relationship with the former One Direction star was lacking in the bedroom? While these alleged lines don't sound to me like Little Mix's feminist style, they do aim right for the jugular of a lost love.

Whether or not these are the real lyrics to "Shout Out To My Ex," and whether or not the song is really about Zayn, remains to be seen, but it certainly sounds as though Edwards has moved on with her life since her high-profile split from the singer. It's great to hear Little Mix refusing to be brought down by bad relationships and gearing up to deliver another empowering song for women, especially women who have been scorned.

More like this
'Traumazine' Has Megan Thee Stallion Twitter Dancing Through Their Feelings
By Grace Wehniainen
Leona Lewis & Husband Dennis Jauch Welcomed Their First Child
By Darshita Goyal
Who Is Camila Cabello Dating? She's Getting Cozy With Lox Club CEO Austin Kevitch
By Radhika Menon
Who Is Bad Bunny Dating? Gabriela Berlingeri's Vocals Are Featured On His Song "En Casita"
By Radhika Menon
Get Even More From Bustle — Sign Up For The Newsletter