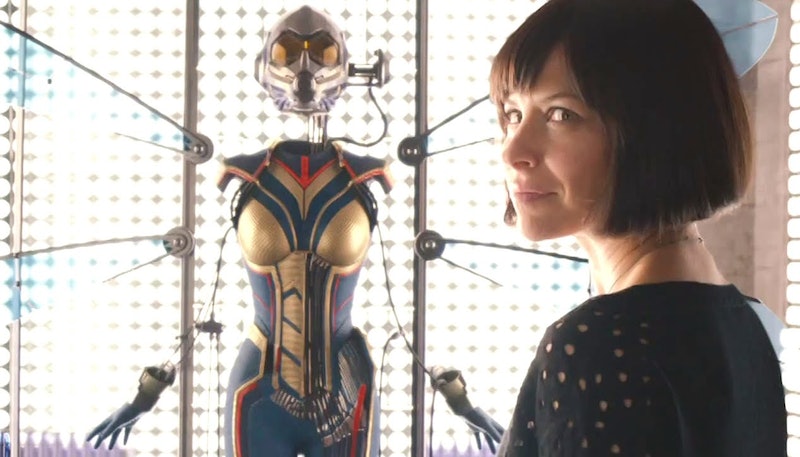 Ant-Man may have been an amazing movie in terms of introducing the world to Scott Lang as the titular hero, but there's another hero that fans are dying to see: the Wasp. With the Wasp set to be officially seen in the 2018 film, Ant-Man and the Wasp, Evangeline Lilly is excited as we are to finally wear that super suit. And, in a New York Comic-Con interview with Blastr, the actress is finally letting us all in on when the Wasp will be joining the Avengers, because that's a thing that's totally happening. Rest assured, the Wasp receiving the introduction she deserves.

"I haven't actually seen the script [Ant-Man and the Wasp]," said Lilly. "I have talked to [director Peyton Reed] about where they're heading and what they want to focus on and I'm excited because it's essentially going to be the origin of the Wasp. We're going to see the Wasp for the first time take on the mantle and put on the suit and fly about and do her thing. And then, following that one, there's an Avengers 3 coming out — it's a two-parter — and the Wasp won't be in the first part. She'll be in the second part because they really want to preserve that reveal for Ant-Man and the Wasp."

This will give the Wasp the superhero origin story we've been waiting for, even if it means she'll be in less movies at the moment than her male counterpart.

This would mark Marvel's first true female superhero origin story. A of right now, the only female superheroes who have made their way into the Avengers have done so without proper origin stories: Black Widow (Scarlett Johansson) and the Scarlet Witch (Elizabeth Olsen). Captain Marvel (Brie Larson) isn't set to have her own origin film until 2019, after her 2018 Avengers: Infinity War reveal. This makes the Wasp the only female superhero that we will see come into her own as a person, then as a hero, and then as an Avenger, as opposed to already being an established hero with command of her powers like the others.

As we've already seen in 2015's Ant-Man, Hope van Dyne is one superhero worth appreciating. I can't wait to watch an entire film devoted to appreciating her as well.