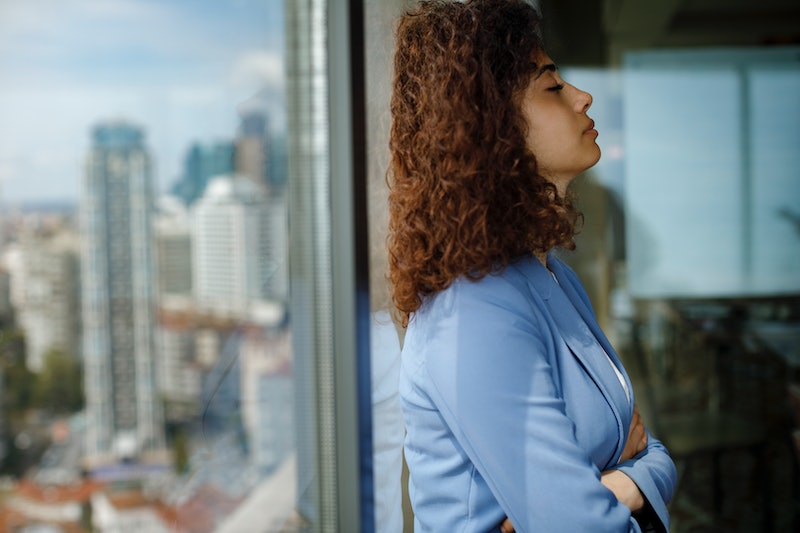 Slackers, beware: Another excuse for not doing something has just been tossed right out the window. According to a new study by scientists at the University of Illinois, why we get distracted might actually depend on the task at hand. More specifically, the research found that it's more difficult for us to concentrate on easier tasks than it is to concentrate on more difficult ones. This finding runs counter to the common belief that the more difficult a task, the more our brains will search for something to distract them — so why is that? Turns out, it all has to do with how engaged we are with whatever we're doing.

In the study, which was published in the Journal of Experimental Psychology: General, participants were asked to complete math problems while neutral scenes (think fields, flowers, and the like) flashed on a screen in three-second increments. Simona Buetti and Alejandro Lleras, professors at the University of Illinois and leaders of the study, then tracked participants' eye movements to test how engaged they were with the task at hand. Contrary to popular belief, which posits that when faced with difficult problems, the mind seeks out an increasing number of distractions, the harder the task, the less sensitive to surrounding imagery participants proved to be.

These findings go hand in hand with the phenomenon of "inattentional blindness" — when people who are heavily engaged in a task fail to notice unexpected or odd events. In order to feel a greater sense of focus, human may temporarily disengage from the world around them, ignoring anything that does not relate to the task at hand.

When the problem set was a mix of easy and difficult tasks, though, the participants' attention didn't waver. Thus, Buetti and Lleras concluded that distractibility was not exclusively based on the difficulty of a problem; rather, it was based on a person's overall engagement.

Of course, there are plenty of other factors that might affect how easily distracted you are, from how high you score on the personality trait of neuroticism to how smart you are. But the next time that you're prepping for a test or a really, really boring meeting, try getting yourself hyped up. Maybe try mentally raising the stakes. Maybe pretend that you are Daenerys Targaryen, flying in on her dragon, extracting herself from yet another bananas situation. Or, like, just remind yourself that tests and meeting are important. Whatever gets you engaged. You'll probably get more done in the long run, and the quality of your work will be better, too. Everyone loves a good productivity hack, right?