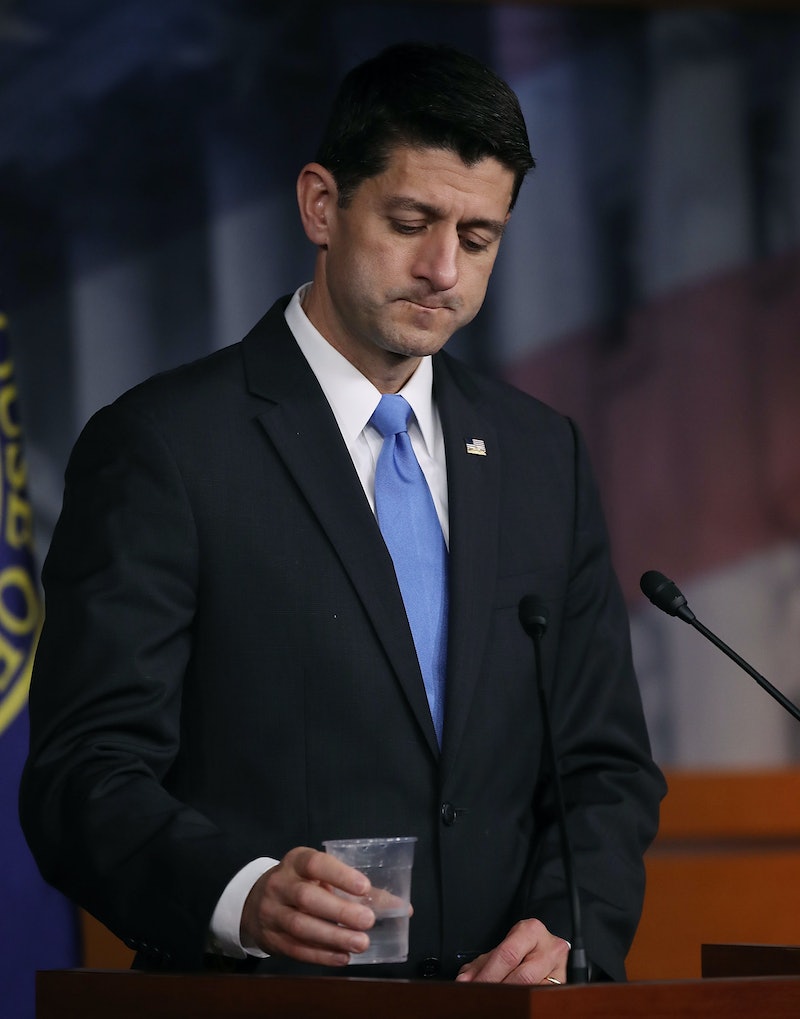 Donald Trump may have saved his candidacy from the brink of utter disaster with his disturbing-but-not-entirely-unhinged performance in Sunday night’s debate. However, in doing so, Trump has pinned his party underneath a boulder. At the moment, it seems as if the GOP is seriously considering a self-amputation to save itself.

House Speaker Paul Ryan, in a call with the Republican conference Monday morning, urged GOP candidates to focus on their own campaigns. Ryan also said that he “won’t defend” Trump, instead focusing his attentions on maintaining control of the House, according to reporting by The New York Times.

In turn, a few hours later, Trump responded to Ryan via Twitter, calling out the Speaker for his comments against him. "Paul Ryan should spend more time on balancing the budget, jobs and illegal immigration and not waste his time on fighting Republican nominee," he tweeted.

The relationship between this year's Republican presidential nominee and the actual Republican Party has largely been seen as transactional. Each has begrudgingly tolerated the other for what they provide. The Republican Party got the huge groundswell of enthusiastic, ecstatic support from Trump’s disciples, and Trump got a national apparatus for his candidacy.

But the alliance between Trump and his party has never been comfortable. Now, in the waning days of the seemingly endless 2016 campaign, amidst increasingly uncomfortable revelations about the candidate’s financial and personal past, the connection between the two has turned downright sour. After Friday’s release of tapes wherein Trump is overheard bragging about sexual escapades that sound non-consensual in vulgar language, dozens of GOP officials publicly distanced themselves from Trump, saying they wouldn’t vote for their party’s standard-bearer.

Indeed, the ups and downs of the Trump campaign seem to be the perfect black light for exposing the hypocrisy of the Republicans in 2016, especially as Trump seems prepared to retaliate against those who pulled their support. Many observers called out the defectors, effectively asking “What took you so long?” and noting the laundry list of abhorrent statements Trump had made in the months leading up to Friday’s bombshell.

There’s something fascinating about the extent to which Trump only works as a viable national leader if one completely and wholly buys into his bizarro narrative. The reason that the Friday and Saturday GOP defections, followed by a nonfatal Trump performance on Sunday, are so damaging is that down-ticket Republicans showed themselves to momentarily have souls (or at least, a political survival instinct which forced them to fake souls). But once you have a soul (or pretend to have one), you can’t suddenly become un-offended by all the execrable things Trump has said.

That's why it's possible that the guy with the hardest job in politics was Speaker Ryan. After his initial statement angered many Republicans on the conference call, Ryan came back on to clarify that he was not un-endorsing Trump, even though he believes he will lose. I think we all know what things are like in his office today.