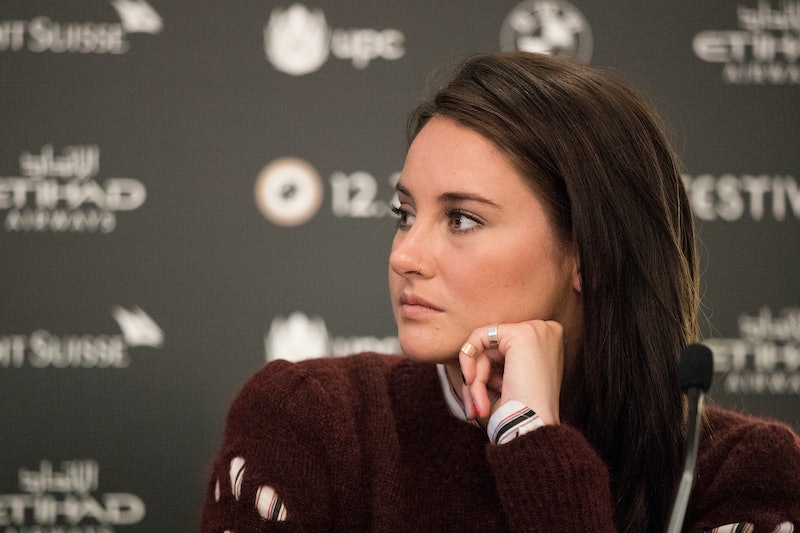 On Monday, Oct. 10, it was confirmed that Shailene Woodley was arrested for alleged trespassing while protesting the controversial North Dakota pipeline. According to TMZ, the actor was arrested for allegedly participating in "two misdemeanors ... including engaging in a riot." (Her legal rep told Bustle in a statement, "We do not comment on client matters." Bustle has also reached out to the Morton County sheriff's department but has not yet received a response.) As the news surrounding Woodley's arrest unfolds, it's natural to wonder if Woodley's arrest will land her in jail or what the consequences will be.

Earlier: Woodley, who streamed her arrest on Facebook Live, documented the ordeal for the 40,000 people tuning in.

"I don't know if you guys just heard me, but I was walking back to my RV, which is right there so that we can go back to camp peacefully and they grabbed me by my jacket and said that I was not allowed to continue," she claimed in one video. "And they had giant guns and batons and zip ties and they're not letting me go." A cop is seen telling her: "We can't talk right here, but you're going to be placed under arrest for criminal trespassing."

After Woodley questioned a police officer as to why she was the only one being arrested, he replied: "You were identified."

"As soon as you guys asked me to leave, I left," she responded. According to TMZ, 26 other protesters were also arrested.

As for whether or not Woodley will face jail time, it's important to note that one of the main protestors was allegedly jailed for criminal trespassing while protesting — though his lawyers reportedly stated that such action is "highly unusual" for the misdemeanor.

According to Democracy Now, Cody Hall — who is allegedly the lead protester in the movement against the Dakota Access Pipeline — was arrested for alleged criminal trespassing while protesting back in September and was jailed for it.

"Hall was denied bail and remained in jail throughout the weekend," Democracy Now reported at the time. "Hall's attorneys and several others we spoke to confirmed that it is highly unusual for a defendant charged with misdemeanor trespass to be jailed and denied bail." Hall told Native News Online, "The biggest part of this is they tried to silence me. It won’t work. I will continue to fight for what I think is right."

As for Woodley's own fate, it looks like the public may have to wait to find out. However, with just how outspoken she has been during the protest and her own arrest, I imagine she will let everyone know the results of her arrest as soon as she can.