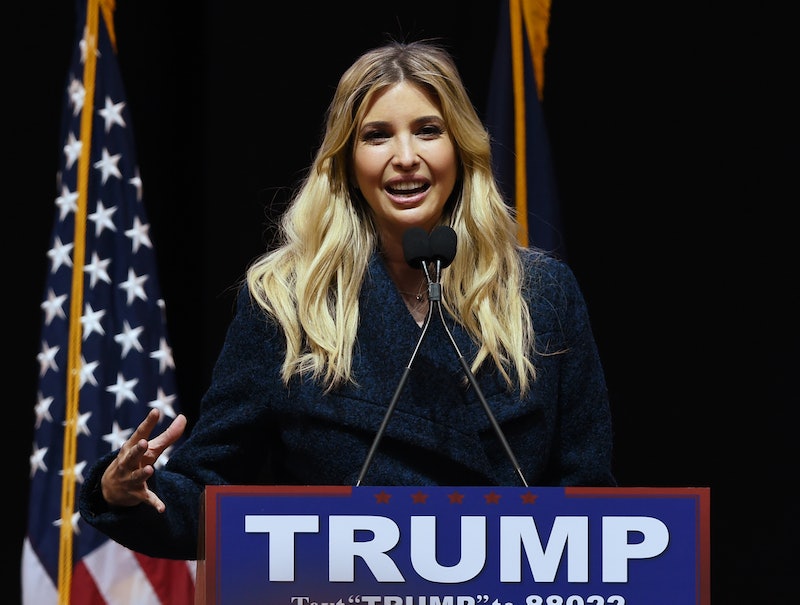 On Monday afternoon, Andrew Kaczynski of CNN's KFile unit noticed that Ivanka Trump had hit "favorite" on a tweet by HuffPost Politics which linked to the article "Donald Trump: Sure, Call My Daughter A ‘Piece Of Ass.’" Hmm. The title refers to Trump's interview with Howard Stern, in which Stern asks the presidential nominee if it would be OK to call Ivanka a "piece of ass," and is told "Yeah" in response.

The article in question portrays Donald Trump negatively, prompting questions as to whether this was evidence of his daughter being offended by his words. Us Weekly later reported it was nothing more than "a simple mistake made by a staff member." The Huffington Post also ends all of its coverage on Trump like this:

Editor’s note: Donald Trump regularly incites political violence and is a serial liar, rampant xenophobe, racist, misogynist and birther who has repeatedly pledged to ban all Muslims — 1.6 billion members of an entire religion — from entering the U.S.

So what gives? Well, Ivanka has not given any public statement regarding this past weekend's Trump tape scandal, but she has continued to give him her support. Considering her father made other strange comments about his daughter's attractiveness prior to this Howard Stern Show quote coming to light, it's possible that she's desensitized to it. In a 1996 interview, Donald Trump was quoted saying, "I’ve said if Ivanka weren’t my daughter, perhaps I’d be dating her," and in another interview earlier this year, he said, "If I weren’t happily married and, ya know, her father…"

Ivanka has served as the Republican nominee's top surrogate in the campaign's female voter outreach plans. Just last month, during a joint appearance on The Dr. Oz Show, she defended her father's past behavior toward women with the following argument:

I do think there is a bit of a false narrative on this out there, though, in that my father speaks his mind. So whether it's a man or a woman, if you attack him he'll attack you back. In a certain way, it would be strange if he handled women and men differently. So he can be a little rough with people once in a while, but it is often that they're coming at you first, almost always that they’re coming at you first.

With this mentality in mind, it's possible that Ivanka considers her father's comments about her body to simply be more instances in which he's "speaking his mind." Still, several people on Twitter were quick to point out the awkward physical behavior between Trump and Ivanka — not to mention Tiffany Trump ducking to avoid her father's affection — at Sunday night's debate.

It's possible that Ivanka hitting "favorite" on the tweet was an accident. Maybe she intended to bookmark it or send it on to her father's campaign. Frankly, whether or not Ivanka is truly OK with the way he speaks about her is something we'll have to wait for her to address.