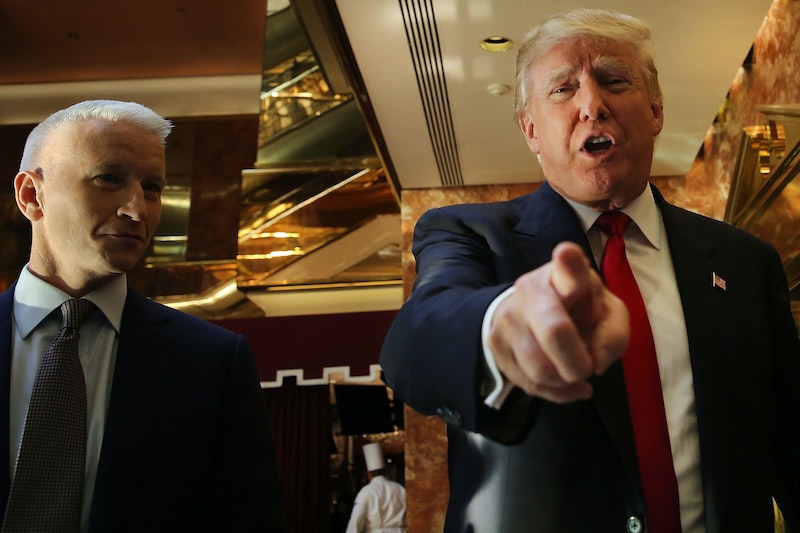 Donald Trump is a brutal man. We've known this for a while. Since day one of his campaign, the GOP presidential nominee has gone after Mexicans, undocumented immigrants, black Americans, Muslim Americans, people with disabilities, the LGBTQ community, women, and now survivors of sexual assault. On Friday, Oct. 7, The Washington Post released recorded tapes that reveal the real estate mogul bragging about groping and kissing women without consent, which he says he gets away with and is entitled to because of his celebrity status. But what Trump described in those tapes happened to me. And I know that defending his so-called "locker room banter" with the "boys will be boys" narrative is harmful, offensive, and abusive.

In the aftermath of the leaked recordings, some jumped to Trump's defense, suggesting that what he said isn't harmful — it's what boys talk about when women aren't around. And Trump said he's sorry nonetheless. We need not be offended by his use of the term "pussy," this school of thought goes, or his objectification of women as sexual objects.

Look, I don't care if Trump wants to use the word "pussy." I don't love it, but that's not why I'm mad. I'm mad because his conversation with Billy Bush was more than "lewd." What offends me is that Trump thinks he can grab women without their consent, because of his fame and his money, and that it's not violent. What offends me even more is that there are people who agree with him.

When I was a third-year college student, this happened to me. No, nobody approached me and groped me out of nowhere. It was a then-friend who took advantage of me while we were casually seeing one another. The details of our relationship don't matter, but it wasn't anything serious between us. He was just nice, good company, and someone I was enjoying getting to know.

By suggesting that his conversation was simple locker room "boys will be boys" banter, Trump is upholding the violent and patriarchal notion that violence against women is both normal and OK.

One night, we were hanging out in his room. When I told him I wanted to sleep, when I kissed him goodnight and turned over, when he got on top of me and touched me in ways that I never allowed — that I never consented to — that is exactly what Trump is describing in those recordings. What happened to me was horrible, and is something from which I am constantly working on healing. It took me forever to process that this person's actions were actually not OK. It took me forever to finally confront him about what he did to me. It is just one violent action perpetrated against me by a man. And it's one that frames so many of my interactions with other men.

I am hardly the only person who has experienced the "lewd" actions Trump described. In fact, there are millions of other people out there who have similar stories, each one of them unique. Our voices, stories, experiences, and healing are incredibly important. But for me, watching an alleged sexual abuser run for highest office is both a slap in the face and incredibly difficult, because Trump is one of those people who reminds us of our abusers — the ones who do what they want and then get away with it, without ever thinking about the impact they may have had on another person's life.

During the second presidential debate on Oct. 9, CNN anchor Anderson Cooper said to the GOP nominee:

You called what you said 'locker room banter.' You described kissing women without consent, grabbing the genitals. That is sexual assault. You brag that you have sexually assaulted women. Do you understand that?

Trump suggested that it was locker room talk, that we need to discuss more important things, that "it's just words."

But it's not. His response is just an easy way out of owning that he is an abuser.

How many men in my life have bragged in the locker room about assaulting women? How many of them realize that what they did was an act of sexual violence? This is part of the problematic narrative that the presidential nominee is perpetuating. By suggesting that his conversation was simple "boys will be boys" banter, Trump is upholding the violent and patriarchal notion that violence against women is both normal and OK.

As someone who has experienced the violence of sexual assault, I am offended — though not surprised — that Trump would suggest it is an unimportant issue to discuss. In reality, sexual assault is a crisis in this country. An American is sexually assaulted every 109 seconds, and 9 out of 10 victims are women, according to statistics from RAINN. Does an issue like this which is so pervasive, which has incredibly damaging effects on the person who was abused, really sound unimportant to the presidential nominee? And if so, why is he someone that any American thinks we can afford to elect?

Every time I hear about or from Trump, I am reminded of the violent culture that he embodies and perpetuates. For every community that he has targeted over the course of his campaign, for the Muslims he has sworn to ban, the undocumented immigrants he has promised to deport, the black Americans he says need to be stopped and frisked, the sexual assault victims he brags about in the locker room, can we afford to see this man in power? And what about his supporters, who will still be our uncles, cousins, neighbors, teachers, and police officers even after he loses?

Anyone healing while living in a state of trauma who is forced to hear abusers who do not take responsibility for their actions knows that it is incredibly tiring. I know I'm tired.