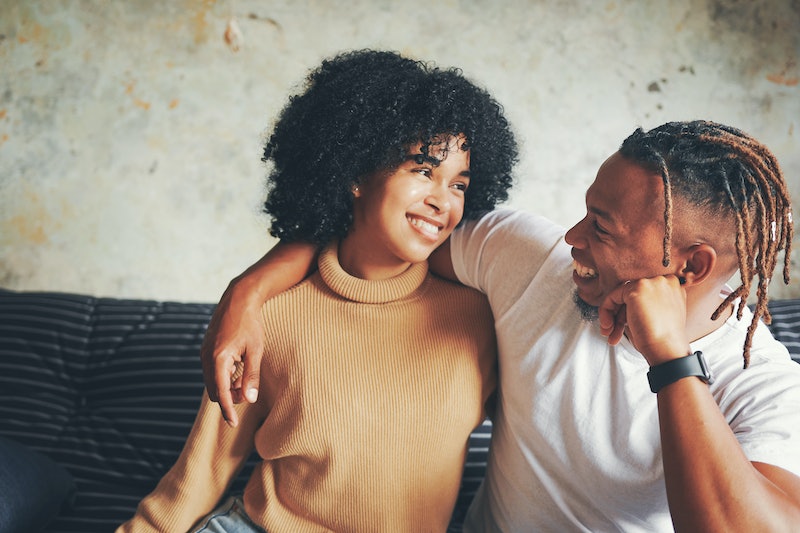 I’m not a person who handles ambiguity well and dating in today’s day and age involves a lot of ambiguity. Are we friends with benefits? Hooking up? A couple? Dating? What does “dating” even ~mean~ anyway? Yeah, that stuff drives me nuts, so I’m all about the explicit, clear DTR — determine the relationship talk. Because if you don’t? If you let things go on for too long without being clear about where it’s going and what you need? You’re bound to get hurt.

Case in point: I was 24, living in New York City, and dating a very attractive — but very messed up — Brooklyn hipster. He was the kind of hot that makes you forgive things that shouldn’t be forgiven, like falling asleep when he knows you’re coming over at two in the morning and leaving you stranded outside in the freezing December weather. (Yup, that happened.) About three months in, after spending at least three nights a week each other, I asked him if he was cool with taking it to the girlfriend/boyfriend level. He dodged the whole conversation with the classic “Why do we need to put a label on it?” response and, because he was so hot and it was wintertime, I let him get away with it.

But the joke was on him in the end, when three months later I decided to move to Argentina without talking to him about it. He freaked out and told me he loved me but I was like, um, I thought you weren’t my boyfriend? So why would you have a say in my life choices? Bye, Felicia.

So yeah, DTR’ing is essential, for your own peace of mind and for that of the people you’re dating. But let’s be real — it’s not an easy conversation to initiate. Just the thought can be enough to make the most intrepid dater break out sweating. So to help all of you figure out how to get through the dreaded DTR conversation with minimal discomfort and stress, I enlisted the help of Demetrius Figueroa, founder of the dating blog and podcast Tao of Indifference. Here are his top seven tips.

“There are few sentences that come with as much baggage as ‘we need to talk’ in modern dating,” Figueroa tells Bustle. “If they’re already a bit gun-shy about defining the relationship, hearing that will only make them more anxious. You’ll get better results by saying something like ‘Hey, can we talk about where we see things going between us?’”

2. Focus On Dialogue, Rather Than Demands

“The quickest way to push somebody to one side of the fence is to force them to choose,” Figueroa says. “If you start the conversation by making the ‘talk’ a list of demands, you might very well force them to make the easiest decision — to leave. The focus should be on sharing your thoughts, wants, and needs, listening to theirs, and determining how to move forward in a way that you’re both happy with.”

3. Tell Them What You’re Looking For In A Relationship

“You should be upfront about what you’re looking for, but leave room for conversation,” Figueroa says. “It’s one thing to say ‘We’re going to be in a relationship, and it’s going to be like this’ and it’s another to say ‘This is the kind of relationship I want. What do you think?’”

4. Ask Them What They’re Looking For In A Relationship

“Remember, it takes two (or more) people to engage in a dialogue, so be sure to make your partner feel like this is a dialogue by asking them what they want,” Figueroa says.

5. Be Specific About What You Want And Need

“Whether it’s deleting dating profiles, or making things Facebook official, paint a complete picture of what you’ll want and need before you enter into a relationship, and also what you need during the relationship,” Figueroa says.

“Sure, you want a commitment, but how soon?” Figueroa says. “Today, tomorrow, or within three months? In order to manage your own expectations, and theirs, you should be open about when you want whatever sort of relationship you’re looking for. You both might want the same things, but on a different timeline, so it’s important to share what you want, and when you want it.”

7. Don’t Have A Relationship-Defining Talk After A Fight

“Far too many relationship defining talks are initiated because one of the parties is upset about their nebulous relationship status,” Figueroa says. “Entering into a relationship is a big step, one you shouldn’t make out of anger. Instead, try to start the conversation from a neutral position. Have the conversation that you both want to have, not a conversation one of you wants to have because you’re angry.”

More like this
The Differences Between Kinks & Fetishes, Explained
By Lexi Inks
Are Quality Time & Gift-Receiving Love Languages Compatible?
By Lexi Inks
It's A Pleasure #53: Help! My Boyfriend Won't Tell Me Why He Stopped Going Down On Me
By Sophia Benoit
The 19 Best Tweets & Memes About Bisexual Awareness Week
By Lexi Inks
Get Even More From Bustle — Sign Up For The Newsletter