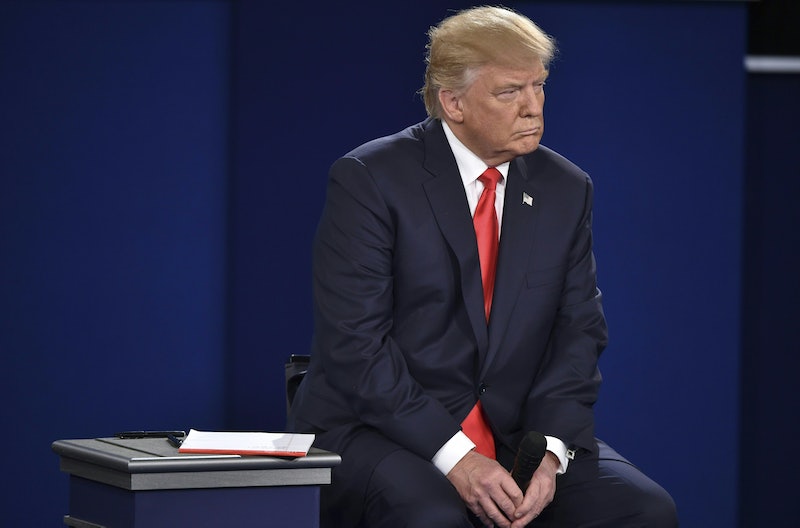 The second presidential debate had no shortage of explosives, and lived up to the prediction that the Oct. 9 debate would be the most volatile one yet. Equipped with back-and-forth insults, Trump's unending interruptions and a threat to throw Clinton "in jail" should he become elected, the debate had a dark and utterly chaotic tone that prompted some news outlets to call it one of the ugliest debates the country has had to date. And of all the Trump tactics used to attack Clinton, his appeal to the Berners was one of his most miserable fails. (That, and his sort of invocation of a police state when he threatened to use his presidential powers to put Clinton in "jail.")

Trump has brought up Sanders several times since Clinton secured the Democratic nomination in what seems to be an attempt to lure in millennials who were Sanders supporters. But he went the extra mile when he said that Sanders had "made a deal with the devil," when he endorsed Clinton at the Democratic nomination. It was one of many jaw-dropping comments made during the Sunday night debate, and it did not go unnoticed.

This is not the first time Trump has used that line. He used it while stumping in Pennsylvania and during an interview. He also went further by flat out asserting that Clinton won the primary through a rigged system in the Democratic National Convention, as per the Wikileaks revelations that appeared to reveal a bias against Sanders and resulted in the resignation of DNC chair Debbie Wasserman Schultz.

Clinton bounced back in two ways. During one point in the evening, Clinton shot back that Wikileaks and Russia were behind recent email hacks, which also implied that Trump was at least tacitly, condoning foreign infiltration of U.S. government information.

"Our intelligence community just came out and said in the last few days that the Kremlin, meaning Putin and the Russian government, are directing the attacks, the hacking on American accounts to influence our election and WikiLeaks is part of that as are other sites where the Russians hack information," Clinton said. "We have never in the history of our country been in a situation where an adversary, a foreign power, is working so hard to influence the outcome of the election."

Furthermore, its hard to imagine that Berners would take kindly to the highly vulgar and offensive language Trump used in the 2005 tape with entertainment reporter Billy Bush, where he bragged about his control and power over women, a topic which moderator Anderson Cooper pursued ruthlessly. Or that he shamelessly dragged Bill Clinton's past into the mix by inviting women who accused the former president of sexual assault to the debate as well as hosting a high-profile conference with the women just before the debate began. It's hard to see how Sanders, who ran a platform that focused on ideals of equality, egalitarianism, and equal pay for men and women, would take well to such Trump tactics. Not to mention Trump's nearly 20-year tax evasion, proposed tax cuts for the wealthy and his frequent xenophobic statements, all of which run in sharp contrast to Sanders.

In addition, Clinton reminded the audience that Sanders did in fact throw his support behind her, and has continued to do so. Just last month, Sanders vehemently stressed that this election was no time for "a protest vote" and urged voters to elect Clinton over Trump saying, "It's time to look at which candidate will work best for the middle class and working families."

In that light, its hard to discern how Trump could attempt to successfully invoke Sanders supporters — when nearly every action he is taking in this campaign seems to run contrary to the ideals that Sanders and his supporters espoused.