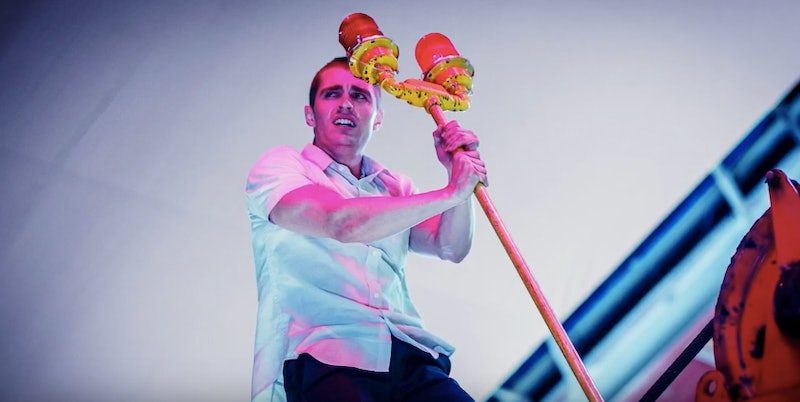 Maybe you couldn't find a moment to lift your head up from Pokemon GO this summer to watch any movies, like the ultra timely digital Truth-Or-Dare movie Nerve . The film finds Emma Roberts' Vee and Dave Franco's Ian in a series of risky situations after they decide to become "players" and get trapped while taking on more and more dares from the games "watchers." Now, if you're suddenly concerned that we could've lost the second hottest Franco brother in an unfortunate sky-falling accident somewhere along the way, fear not: Nerve made good use of green screen, as seen in this exclusive featurette.

The featurette focuses on a scene where Franco as Ian has to embark on a dare that last year killed his friend, and the layers of difficulty Franco had to deal with when trying to act and low-key simultaneously balance on a four inch beam about 18 feet off the ground. "For stunt people it's a little easier, because most time they don't do the words, they're just doing the motions, so they can focus on their physicality," says stunt coordinator Stephen Pope. "Where the actors have to worry about staying in a moment, being with the other actor, you got to play this scene with your dialogue, so it's just like one more layer of kind of distraction from your safety element."

Franco definitely felt that pressure, having to channel recognizable fear as his character endures this traumatic scenario. "So I'm trying to muster up these real emotions as if I'm in this... the most intense situation you could ever imagine," Franco says. "And I hope that when they actually put the graphics in that you really will feel I went there, emotionally." As someone who is deathly afraid of heights, I would be psyched out enough being dangled 18 feet in the air, even with wires, so yeah, definite props go to Franco for being able to push palpable fear into his performance while performing the stunt.

You can watch the daring stunt in action below, and catch Nerve on DVD October 11 and Blu-Ray October 25!