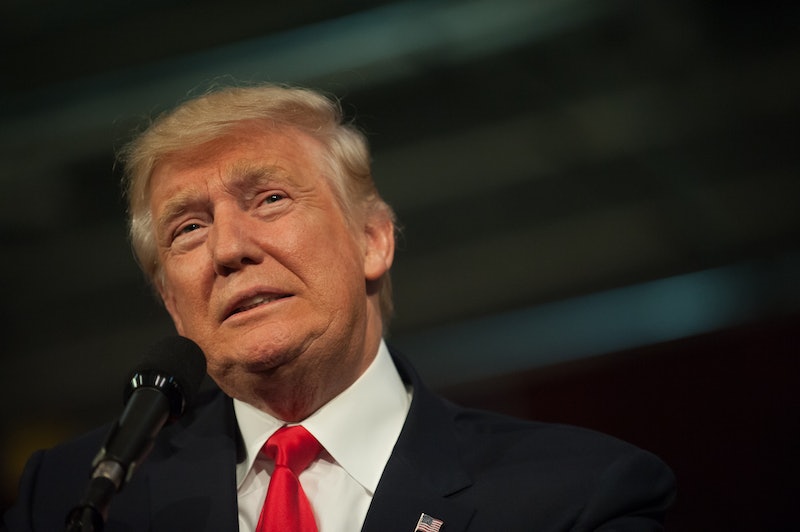 Picking the choicest moment from Sunday night's debate is like choosing your favorite flavor of Ben & Jerry's: they're all so wonderfully complex that it's too hard to pick just one! Except, you know, instead of delicious ice cream, they were horrible word-turds. One particularly fascinating (and horrifying) moment came when Donald Trump suggested the moderators were ganging up on him and siding with Hillary Clinton. While at times it did appear as if the moderators were going after Trump, this had almost nothing to do with any political inclination for Clinton, and everything to do with Trump's contrarian relationship with the truth.

With Trump, It's hard to know precisely how much of his own nonsense he believes — I could see persuasive arguments being made for "all of it" and "none of it." However, the whiny petulance with which he claimed the game was unfair highlighted one of the trickiest questions raised by Trump's candidacy: how does anyone approach the idea of fairness when it ceases to be an objective quality?

Here's the first thing that is important to acknowledge in tackling this question: fairness and truth are inextricably intertwined. The idea that Trump could complain about the debate being unfair to him means he was either willfully ignoring the truth, or simply blind to any information that would contradict him (I think it's probably a little bit of both).

Surely, this is on some level nothing more than a continuation of the tactical idea deployed by Trump and his campaign that the cards are inexorably stacked against him. It has been a brilliant (if not nefarious) strategy from the beginning of his campaign, at once inoculating him against media criticism, freeing him to continue telling lies and half-truths, and generating more sympathy amongst his supporters.

But it also puts the rest of us into dire straits, since trying to reason with someone who denies objective truth is like trying explain to a small child why that can't eat only ice cream: it requires them to have a fundamental understanding of the situation which they critically lack. For instance, despite Trump's outcry at unfairness at getting interrupted during the debate, he actually did talked slightly more than Clinton — and did far more interrupting, according to POLITICO. (Clinton spoke for 38 minutes, 29 seconds, while Trump spoke for 39 minutes, seven seconds. Trump interrupted Clinton 13 times; she interrupted him only once).

Still, though, can't Trump argue that the moderators went after him more, in substance if not in quantity?

This can all get pretty sticky, especially as notions of whether an "objective truth" actually exists clouds the conversation. Without wading too deep into the philosophical weeds, though, let's stipulate as a placeholder that "the truth" is in fact a collection of our subjective impressions of the world — that objectivity is simply the point at which a consensus of subjective observations no longer need to be litigated.

And at the end of the day, there are several inarguable lies that Trump told (and these are far from all of them): he denied having encouraged people to look for a sex tape tied to former Miss Universe Alicia Machado, even though he had done just that; he asked Anderson Cooper "Why aren't you bringing up the emails?" when they had already been brought up by Trump and by moderator Martha Raddatz; Trump said that people "saw the bombs all over the apartment" of the San Bernardino shooters, even though this claim has been thoroughly debunked. But we're never going to be able to convince Trump that they are, in fact lies.

The only thing we can do is to make sure every voter knows about these lies when they enter the voting booth.