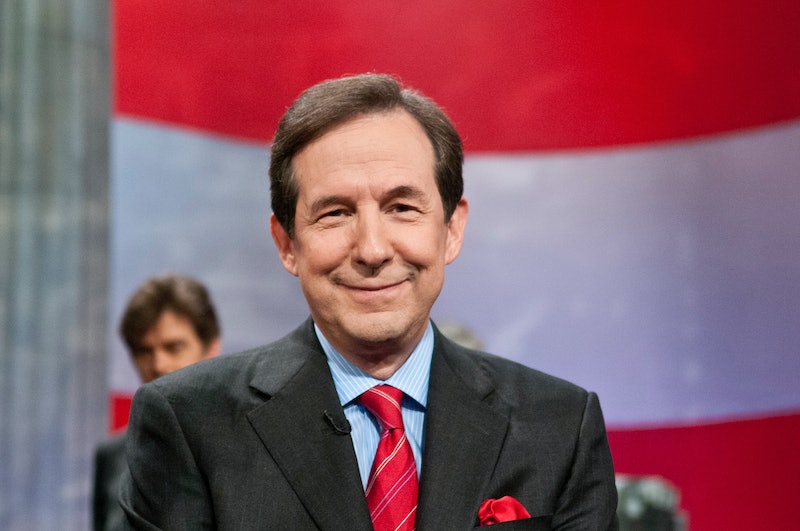 The 2016 presidential election has seen its share of monumental moments — some remarkable, like electing the first female presidential nominee, and others, such as Donald Trump's bragging about being able to grab a woman "by the p*ssy," absolutely appalling. On Wednesday, Oct. 19, another first will take place. That evening, Chris Wallace will moderate the last presidential debate and become the first Fox News employee to host a major debate.

As The Los Angeles Times noted, Wallace joined Fox from ABC News in 2003, and he's known for holding both political parties accountable for their actions. The responsibility of moderating the last presidential debate before the general election Nov. 8 is perhaps the most important of all, as it gives voters one last chance to decide who will win their vote.

Back in January, Wallace criticized the media for not hitting Trump hard enough. He condemned other news anchors for calling Trump on the phone to comment on his actions, rather than conducting an in-depth, face-to-face interview where viewers can gauge Trump's reaction. This kind of comment is a hopeful sign for those who are sick of the GOP nominee getting away with saying whatever he wants during the debate, and then spinning things afterward to make it look like he was right. However, Wallace's comments since then have been a little different.

In September, Fox's Howard Kurtz interviewed Wallace and pressed him on the responsibility of moderating a debate. In response, Wallace declared that it's not up to him to hold the nominees accountable for their answers. Then, when Kurtz asked him what he will do if one of the candidates says something he knows to be untrue, Wallace replied, "That's not my job. I do not believe it is my job to be a truth squad. It's up to the other person to catch them on that." Though it's certainly difficult to fact-check candidates on-the-spot, that strategy will likely cause some controversy among viewers.

Hopefully, like in past debates, Trump won't get away with going around the next day calling the moderator unfair, as he did with Lester Holt after the first presidential debate. The debate will take place on Oct. 19 at the University of Nevada Las Vegas and starts at 9 p.m. ET. Luckily, this should be the last debate we'll have to get through with Trump onstage, and that's a reason enough to be thankful.