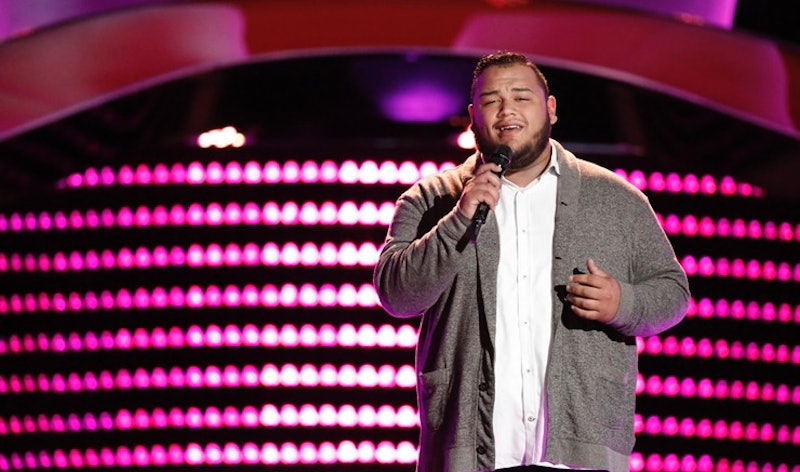 Things got off to a great start from the beginning during Monday's episode of The Voice. Alicia Keys had two singers going head-to-head in the first performance of the night. Team Alicia members Jason Warrior and Christian Cuevas battled it out to Adele's song "Hello." I had no idea how they would would fare taking on a song that's such a monster hit, but they both killed it.

Unlike the other coaches who brought in veterans to mentor their teams, Keys brought in Charlie Puth who she described as "fresh meat" to help Jason and Christian with their performances. When speaking about the contestants, Puth said, "both of you have incredible vocal power, seriously," so it really seemed to be anyone's game. Keys described the challenge going into the performance by saying that "Hello" is a "beautiful song on a male voice, not an easy song to sing, at the same time I know they can handle it"— which they masterfully did.

In response to the performance, Miley Cyrus spoke for all fans when she said, "Dang, Alicia's been dreading this moment, I'm not kidding." Adam Levine also couldn't fathom that Keys had to make this choice. The Maroon 5 front man said, "The fact that one of you technically has to be available now blows my mind." And then Cyrus interjected by saying, "He's so happy."

So, clearly Keys was left with a tough decision to make and she was overwhelmed since she said, "I just hurt my hand because I banged on this so hard, and I jumped up and down because I was so taken by both of you." It was nail biter for sure. Levine actually said, "This is messing me up and I'm not even making the decision."

Knowing that it was a tough call to make, Keys not-so-subtly suggested that one of the other judges save whoever she did not end up choosing saying, "If for some reason anybody goes home, I'm whooping one or two ass." After some tough deliberation, Keys declared Christian to be the winner of the battle round and, as expected, Levine came in with the steal to save Jason. He told Jason, "You're the first person I turned around for, and it's very very rare to have a second chance at this. I am honored to be able to have this chance with you. I will not let you down, my friend. You are on the right team."

And just like that the game has changed. It will definitely be interesting to see how Jason and Christian end up faring throughout the rest of the competition.