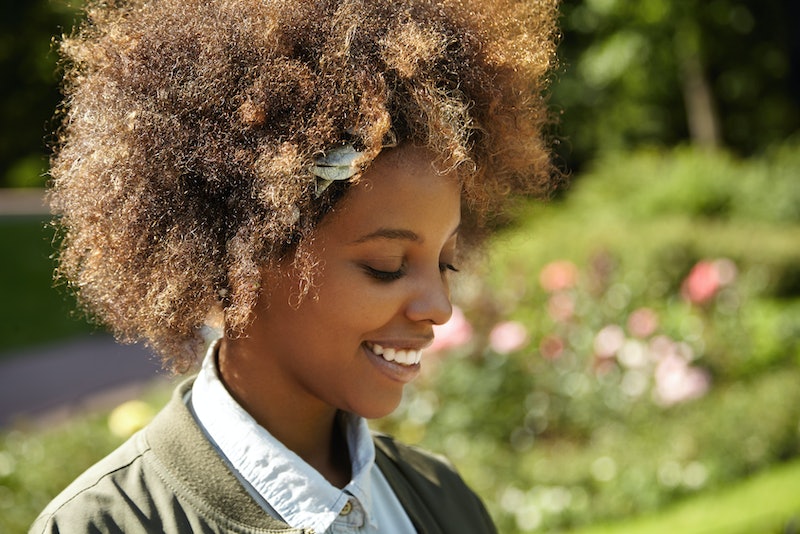 It can sometimes be a lot easier said than done to truly be single and happy. By which I mean, being single is actually great and fulfilling — and we need to stop talking about single women like they're some big problem. There are so many great things about being single, but it's easy to forget it because of how single women are portrayed.

First off, take a moment to remind yourself that you're not doing anything wrong. It doesn't take a rocket scientist to be in a relationship. "You’re being true to yourself," New York–based relationship expert and author April Masini tells Bustle. "Getting a date — even getting married — is not that difficult. But doing it on your terms because you’re ready and you think your partner is the right one takes discrimination, hard work and time... You’re not going to live life on someone else’s schedule. You’re living your life and being true to yourself by doing your diligence and living honestly."

Why would anybody ever doubt how awesome that is? Well, probably because of the endless horrible stereotypes about unmarried women. It's time they have to end. Here are seven stereotypes about single women and why they are totally BS:

1. That They Don't Want To Be Single

I was single for a long time — and for most of that, like years, I genuinely wanted to be. But I got a lot of knowing looks, those patronizing and frustrating ones that say you're just kidding yourself. It's not OK. "Some people simply know they want to stay single," New York–based relationship expert and author April Masini tells Bustle. "They enjoy the freedom, and they don’t have any anxiety about missing out on being part of a couple," she says. "If you’re single, happy and have no regrets, it was meant to be." Don't let people act like you should be looking for "The One" when you're already "The One".

2. That They're Too Picky

4. That They Don't Know What They Want

Nope. There is literally no better way of knowing what you want than being single. “You are able to learn who you are as an individual, and not as a couple " psychologist Dr. Nikki Martinez tells Bustle." This is an important differentiation. Who we are alone, as a unique human being on our own, is often very different than what we become, or what we allow ourselves to be in a relationship. This is your time to get a firm sense of self, and to promise yourself to never forget it, or let go of it, no matter who you are or are not with."

I love being in a relationship because I love my girlfriend, but it also means that my needs and time are now informed by her needs and time — they all get jumbled up together. It's worth it because I'm in a great relationship, but it wouldn't be worth it for wrong one.

5. That Their Priorities Are Wrong

No, just because you're single doesn't mean you're a workaholic or obsessed with partying. It just means that you're single. It's not a reflection on your priorities, but even if it is — who cares? Your priorities are yours to have, not for other to dictate.

6. That Kids Are Out Of The Question

A lot of people link being single and being childless, which is ridiculous. There's adoption, there are sperm donors — and those things don't need to be looked at as last resorts. If you want a kid, you can have one, single or not single.

7. That They Are Unhappy

Bottom line? Being single is not sad Valentine's Days and lonely takeout for one every night. So let's stop acting like it's something to be pitied or patronized and let's start admitting that you can be happy and fulfilled and totally owning it on your own — and that so many single people already are.

More like this
The Best Time To Date After A Breakup, According To Experts
By Bustle Editors
Are Leo & Capricorn A Good Match?
By Kristine Fellizar
Expert Tips For Being On Top When You're Plus-Size
By Lexi Inks
What Is The Forest Personality Test? The TikTok Trend, Explained
By Georgina Lawton
Get Even More From Bustle — Sign Up For The Newsletter