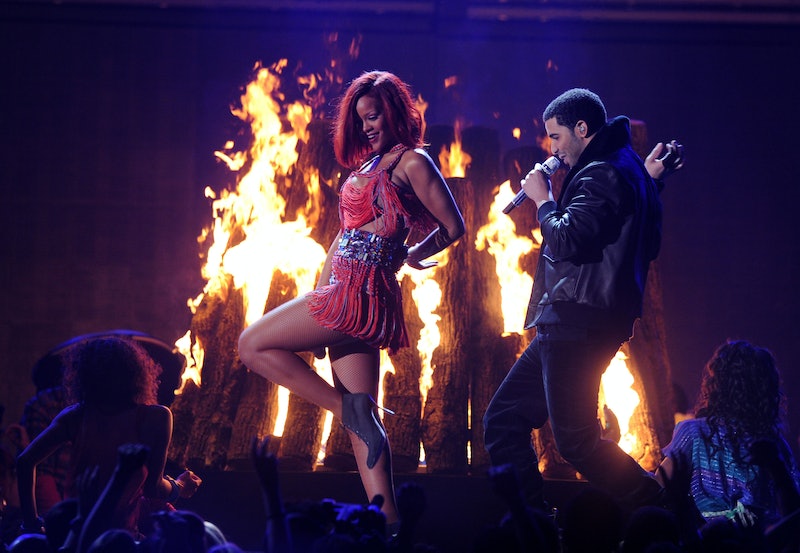 There is no bigger Aubrih shipper on this planet than yours truly. So, when E! Online reported that Drake and Rihanna are currently "seeing other people," I was crushed. Devastated. Heartbroken. Blindsided. While it's hard to not take this as a personal affront after tweeting so excitedly about their unofficially official union, I suppose I'll have to take the news a little less to heart. But, the thing is, after that swoon-worthy VMAs shout out, how could they have broken up so quickly? Is it that we're just interpreting this all wrong? Are Drake and Rihanna in an open relationship?

Honestly, if they were, it would explain a whole lot. And probably ease some of my Aubrih anxiety a bit knowing they aren't totally over. What? I can't help it. I'm invested in them. And if the horrified tweets are any indication, I am most definitely not alone in my sadness over the potential unhappy end to this real life rom-com. Fans are being pretty damn vocal about their reaction to the Drake and Rihanna relationship fallout and none of it is pretty. But, on the bright side, a lot of the fan outcry is funny in the sense that most fans are just outright rejecting the notion of their split.

According to E!, there's good and bad news for those of us in Aubrih breakup denial, because the "open relationship" thing is reportedly the case. The bad news? According to one source, Drake and India Love are "hooking up." The good news? As per another E! Online "insider,"

"Rihanna and Drake are seeing other people at the moment. They are not exclusive anymore. They still love each other, but their schedules have gotten in the way. Anything can change between them though, for better or worse. They are still in each other's lives."

A source who spoke with People also claimed that they have an open relationship. A source told the publication that they are still together "but it’s an open thing." Another source said, that they "spent a lot of time together and were really close but never considered themselves to be ‘dating.'"

Oddly enough, for this Aubrih shipper, it is a relief to hear that things between them might not be over officially. The life of a celebrity is hectic and impossibly busy, so this "not exclusive" approach to the relationship between them is entirely understandable, if not just a little upsetting for those of us rooting for them. It would also go along with the idea that they've been dating on-and-off for years, because it'd be another way of having an unconventional relationship.

Bustle reached out to reps for Drake, Rihanna, and Love regarding the reports, but has not yet received a response.

More like this
What Is Ariana Grande's Net Worth? When It Comes To Money, She Has No “Problem”
By Hugh McIntyre
Kendall Jenner & Devin Booker Reportedly Broke Up After 2 Years Of Dating
By Jordyn Tilchen
Kim Kardashian & Pete Davidson Took A "Very Romantic" Couples Trip To Tahiti
By Jordyn Tilchen and Bustle Editors
Justin & Hailey Bieber's Bond Is "Unbreakable" Amid His Ramsay Hunt Diagnosis
By Bustle Editors
Get Even More From Bustle — Sign Up For The Newsletter